I love baseball catchers, and baseball cards of catchers.
Since I was a little kid playing and watching the game, it's the catchers position that always drew my eye, starting with my hero, Bill Freehan.
A year after Freehan and the Tigers won the World Series, a young group of New York Mets players came out of nowhere, winning their first N.L. Pennant and the teams first World Series Championship, in 1969.
Catchers are the teams leader, the player who's in on every pitch of the game.
6️⃣9️⃣ The 1969 Mets were led on the field by Jerry Grote, the 27 year old backstop from San Antonio, Texas. 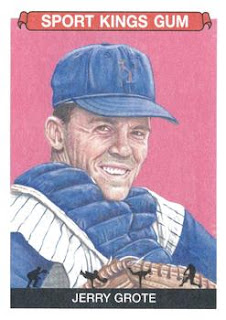 2020 Sport Kings Gum #84, Jerry Grote
( I came across this card looking for a PINK Baseball card to post.)
Grote played 12 of his 16 years in the big leagues for the Mets, and is still 5th All-Time in games played in franchisehistory, with 1,235.
Grote retired with a marvelous fielding percentage of .991, still good enough for 86th All-Time, some 40 years after he retired.
👉 Mr. Grote has a Facebook page.
💗💗 Make sure you head over to see today's Save Second post by the man himself,  Collecting Cutch. 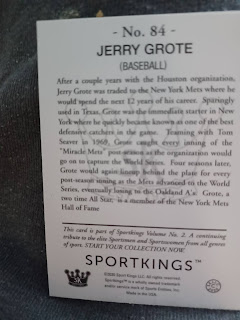 👉 This card was sent to me from a collector from a Sunday morning thread on Twitter, where cards are sent for FREE, and collectors can trade with each other.
Absolutely NO selling happens, so, if your on tge tweets, cone by and have some fun.
🤔 Who's your favorite big league catcher?
Many thanks to everyone who took time out of their busy day to stop by a check out ye Olde Baseball.
Have a terrific weekend, and,always remember, PLAY BALL! ⚾️💗💗
Posted by John Sharp at 5:00 PM