I saw this special patch for Yankees closer Mariano Rivera today and I had to put it on the blog.

New Era will be selling the special Rivera Yankees ball cap soon, as reported on Hardballtalk.com.

Now I'm no fan of the Bronx Bombers, but I wouldn't mind having the patch, or the hat itself.

Rivera is in his final big league season, closing out the greatest career ever by a big league relief man.

In 19 seasons, all in Yankee Pinstripes, Rivera has a big league record 633 saves, in an amazing 1,080 appearances.

I can remember when Rivera was the set up man for John Wetteland when New York won the 1996 World Series.

Wetteland left for free agency after the '96 season, and Rivera became the Yankees closer.

Everything comes to an end, especially in sports, and in big league baseball, after the 2013 season, their will be no more "enter the Sandman."
Posted by John Sharp at 8:11 PM No comments:

Torii Hunter of the Detroit Tigers hit HR #300 of his career today, in Minnesota, as the Tigers beat the Twins, Hunter's original big league club, 5-2.

(Photo courtesy of the Detroit Tigers)
It's only fitting that Hunter hit #300 as a member of the Tigers vs. the Twins, seeing that he hit his 1st ever home run as a young Twins outfielder against the Tigers.

Posted by John Sharp at 2:22 PM No comments: 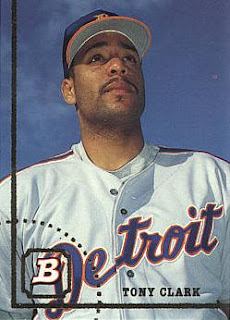 We was a two sport star at San Diego Sate University when the Tigers came calling.


Clark made his big league debut on September 3rd, 1995, and after the Tigers traded Cecil Fielder to the Yankees in 1996, the first base job was his.


Tony Clark is one of my favorite Tiger first baseman. 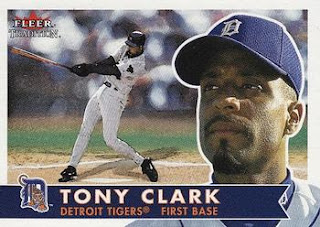 I had the chance to see the Tigers play in Tampa a few times when Tony was with the team.

Opening Day 1998, I sat high up in the stands at Tropicana Field as the Tigers welcomed the then Tampa Bay Devil Rays into big league baseball with a 11-6 Detroit victory, as Clark went 2-5 with 2 runs scored.


I still have this thing, handed out at the game. 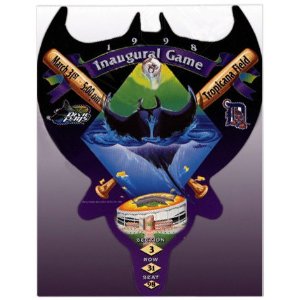 Tony Clark hit home runs from both sides of the plate 7 times, 6 times as a member of the Tigers, beginning with his 2-dinger game at Comiskey Park in Chicago on April 5th, 1997.

The game I attended in '98 was one of three times that season that Tony hit home runs from both sides of the plate. 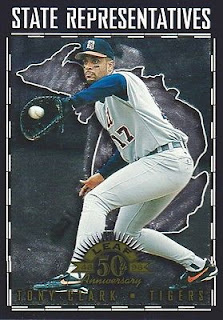 Tony played with the Tigers through the 2001 season, then moved on to play with the Red Sox, Diamondbacks, Mets, Yankees, and Padres. 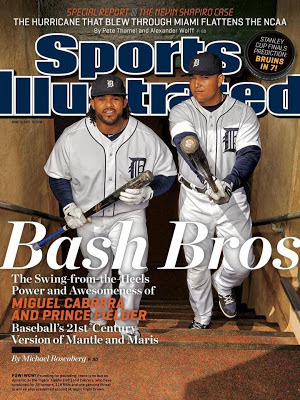 Cabrera is the reining Triple Crown Champion and American League Most Valuable Player, and is the current MLB leader in batting average, .363, RBI, 69, hits, 91, and is 3rd in slugging  %, at .645.

I always like it when SI decides to put baseball on the cover, especially when it's the Tigers, which rarely happens.

The last Tiger cover boy, I believe, was Justin Verlander.

We are in a terrific period of Tigers baseball, with the last two A. L. MVPs in Verlander (also the 2011 Cy Young Award winner) and Cabrera, with a future MVP in Fielder, and a future Cy Young Award Winner in RHP Max Scherzer.

I can't wait to go out and get my copy.

Posted by John Sharp at 4:02 PM No comments:

Thanks to all my readers.

I write this blog because I have a passion for our National Pastime.

Here's to more stuff about baseball, from me, and from all of you out there who write baseball blogs.

I learn so much reading your blogs.

It amazes me how many baseball fans are out there writing about the greatest sport ever invented.

Continue good luck to you all.

Baseball players had already joined up to serve in the Navy, Army, and Marine Corps after the Japanese attack on Pearl Harbor, on December 7th, 1941.

Players such as Hank Greenberg, Bob Feller, Ted Williams, Joe DiMaggio, and others, served for many years, some until the end of the war.

All baseball games were cancelled by Commissioner Kennesaw Mountain Landis on June 6th, 1944.

In January 1942 President Franklin Roosevelt sent a letter to baseball Commissioner Landis stating he wanted the National Pastime to continue.

That letter is known as the  "Green Light Letter."

In the letter FDR states... "... I honestly feel that it would be best for the country to keep baseball going."

Today we pause to remember the Men and Women who fought for our freedom on that historic day as the Allied Forces landed on the beaches of Normandy, Utah, Gold, and Sword.

May God Bless all our military Men and Women serving America today, in this country, and abroad. 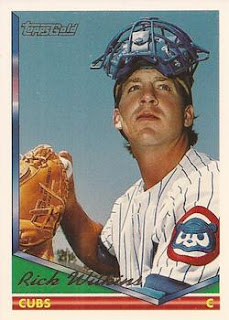 Richard David Wilkins was born in Jacksonville on June 4th, 1967.


Rick played High School baseball at The Bolles School here in Jacksonville, then played college baseball at Florida College, now Florida State College, here in Jax., and then on to play for the Purple Paladins of Furman. 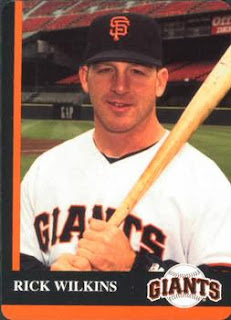 Rick has returned to his hometown here in Jax., running his foundation and baseball academy.

I had the honor to meet and work with Rick Wilkins when I was a restaurant manager here in Jax.

Rick Wilkins is a awesome guy, and I enjoyed working with him during several catering's for his foundation.

A finer person you will not meet.