113  years ago today the Detroit Tigers played their first American League baseball game.
The Tigers scored ten runs in the bottom of the ninth inning at old Bennett Park in Detroit, beating the Milwaukee Brewers, 14-13.

Posted by John Sharp at 4:08 PM No comments:

Today marks the 38th anniversary of the day Chicago Cubs outfielder Rick Monday ran across the outfield grass at Dodger Stadium to rescue an American Flag from being burned by protesters.

Monday's amazing dash to save that flag from being burned by a father and young son has resonated with baseball fans and military service members over the decades.

Monday served in the military before his big league career, and has been honored over the past decades since that day in 1976.

Rick Monday will tell you he's not the hero, that the real hero's are the great men and women of our great country.

God Bless you Rick Monday, and God Bless our awesome military members who risk their lives to keep us safe.

Samuel Earl "Wahoo Sam" Crawford made his big league debut on September 10, 1899, for the Cincinnati Reds.

Wahoo Sam was a fast runner, and an even better hitter.

Crawford led the National League in home runs in 1901, smashing 16 dingers, many of them of the inside the park variety.

After four years with the Reds, Crawford joined the American League Detroit Tigers.

Crawford was a feared hitter, batting .309 in his 18 years in the big leagues.

Wahoo Sam is still, 97 years after his last game, the all time leader in big league triples, with 309.

Wahoo Sam finished his career with a .452 slugging percentage, and only struck out 580 times.

After his release by the Tigers following the 1917 season, Crawford moved west, playing for the Los Angeles Angels of the Pacific Coast League.

Crawford was part of two PCL Championships with the Angels, in 1918 and 1921.

After his playing days Crawford was the Head Baseball coach at the University of Southern California, and an umpire in the PLC.

Wahoo Sam Crawford was inducted into the National Baseball Hall of Fame in 1957.

Crawford suffered a stroke and passed away a few weeks later, on June 15, 1968. 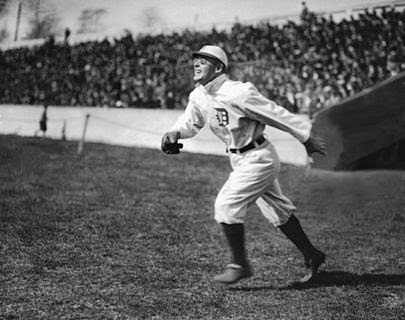 Posted by John Sharp at 5:48 PM No comments:

On April 15, 1947, Jack Roosevelt Robinson played in his first big league baseball game, as a member of the Brooklyn Dodgers.

Posted by John Sharp at 9:51 AM No comments:

Posted by John Sharp at 3:39 PM No comments:

Chuck Connors was signed as a free agent by his hometown Dodgers in 1940.

Connors baseball career moved to the US Army during World War II, where Connors served until 1946.

A terrific athlete, Connors played basketball with the Boston Celtics briefly in '46, before he left for Spring Training with the Dodgers.

From '46-48 Connors played minor league baseball, then, on May 1st, 1949, Connors made his big league debut with his hometown Dodgers.

Connors played in just that one game with Brooklyn, grounding into a double play in his only at bat.

After spending time on the minors again, Connors was traded from Brooklyn to the Chicago Cubs in late 1950.

In 1951 his final season in the big leagues, Connors played in 66 games as a Cub,

As a first baseman Connors was pretty good, a..984 fielding %, committing 8 errors in 493 chances.

Chuck Connors left baseball for acting, appearing in films, and lots of TV shows in a 40 year Hollywood career.

His marquee role as rancher Lucas McCain on the TV Western "The Rifleman, made Connors a star.

His son on the show, played by young Johnny Crawford, was a huge baseball fan who would organize ballgames during show breaks.

He hoped the games would encourage the former big leaguer to play baseball with them.

Chuck Connors was a remarkable man, actor, basketball and baseball player, and was even drafted by the Chicago Bears of the NFL.

Chuck Connors passed away on November 11th, 1992, after a battle with lung cancer.

The Rifleman was 71 at the time of his passing.

Posted by John Sharp at 2:51 PM No comments:

I just picked up the baseball preview issue of Sports Illustrated, and wanted to pass on a must read in the March 31st issue.

Latroy speaks his opinions from his 20 years playing in the big leagues.

At age 41, Latroy will be the oldest player in the majors this year as a member of the Colorado Rockies.

He also has a interesting tale on MLB and Alex Rodriguez.

Check out his article, page 108, of the SI baseball preview issue. 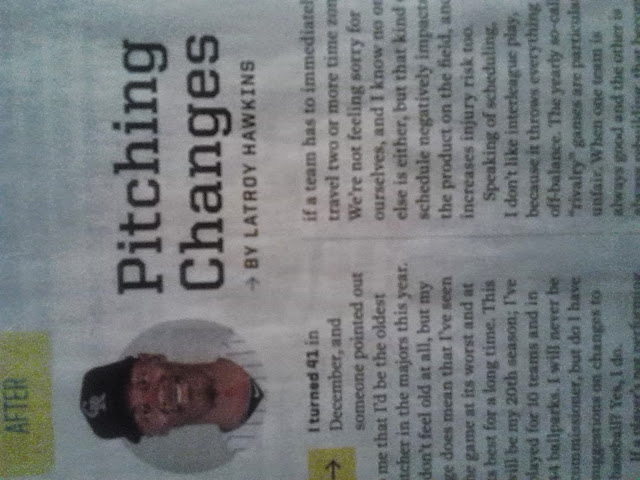 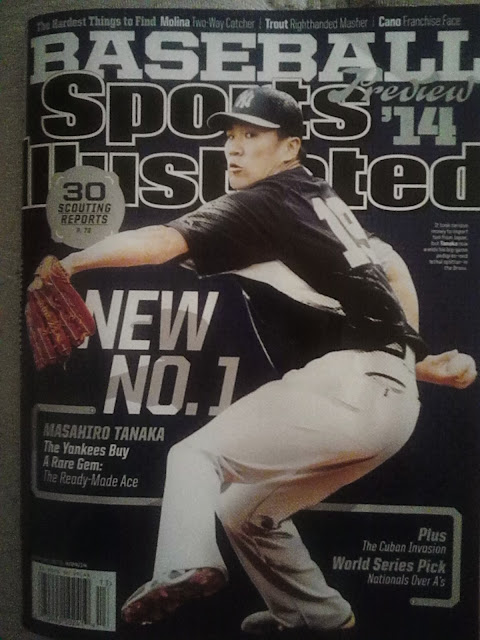 Morris graduated from Munster High School in Munster, Indiana, and went on to play baseball at the University of Michigan.

Michigan went to the College World Series in 1983, and two teammates, Chris Sabo, and Barry Larkin, would reunite with Morris 7 years later as World Series Champions on the 1990 Cincinnati Reds.

Morris was an 8th round draft pick of the New York Yankees in the 1986 amateur player draft.

Morris played for 13 years in the major leagues, with the Yankees, Reds, Kansas City Royals, and Detroit Tigers.

In the field, Morris was a terrific first baseman.

Hal Morris is currently the  Director of Scouting for the Los Angeles Angels of Anaheim.

Posted by John Sharp at 8:38 PM No comments:

Met a young man named Alex today in the Riverside area of Jacksonville.

What are the odds we were wearing the same hat? 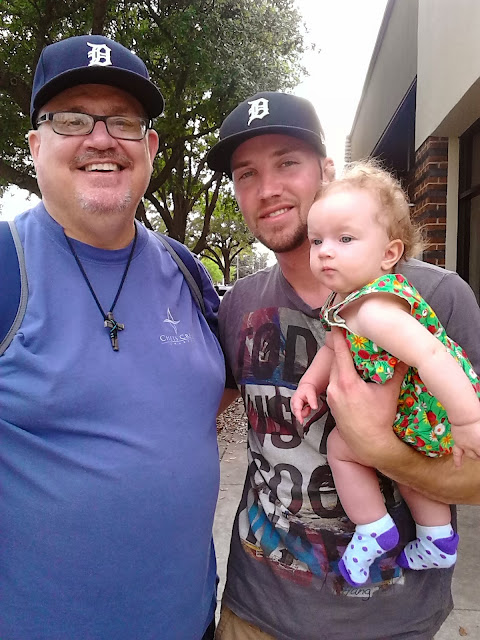 Posted by John Sharp at 6:24 PM No comments:

The Atlanta Braves are giving away this poster tomorrow on the 40th Anniversary of Hammerin' Hank Aaron's 715th home run.

The club tweeted out this poster tonight on their official Twitter page, @Braves

Awesome is all I can say. 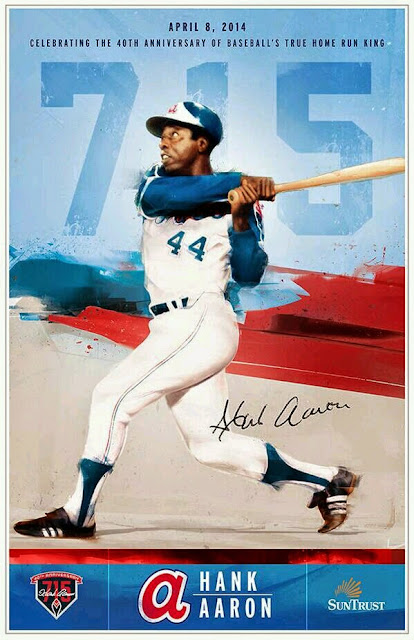 Posted by John Sharp at 6:41 PM No comments:

What I remember about this game is that I was working at the J C Penney in the Regency Square Mall here in Jacksonville while the game was being played.

While on my break that day, I walked up to the TV areanin the store just in time to watch Morris pitch the ninth inning of his no hitter.

The game was the NBC Game of the Week, and for a Tigers fan thousands of miles away from Michigan, it was the only way back then I'd get to see my team play.

That Morris no hitter, along with the Tigers 35-5 start to the season, including a 16 game road winning streak  at the beginning of 1984, gave all Tigers fans reason to believe in our guys that year.

That 1984 team, World Series Champions, was fueled by Morris and his no hitter.

Jack Morris belongs on the baseball Hall of Fame.

Yes, I had to get that in this post.

Posted by John Sharp at 5:39 PM No comments:

2,000 Career Base Hits for Miguel Cabrera 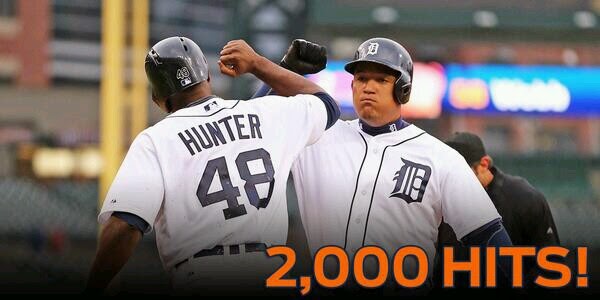 Posted by John Sharp at 5:33 PM No comments:

Posted by John Sharp at 5:31 PM No comments:

I must say, the rings are quite awesome. 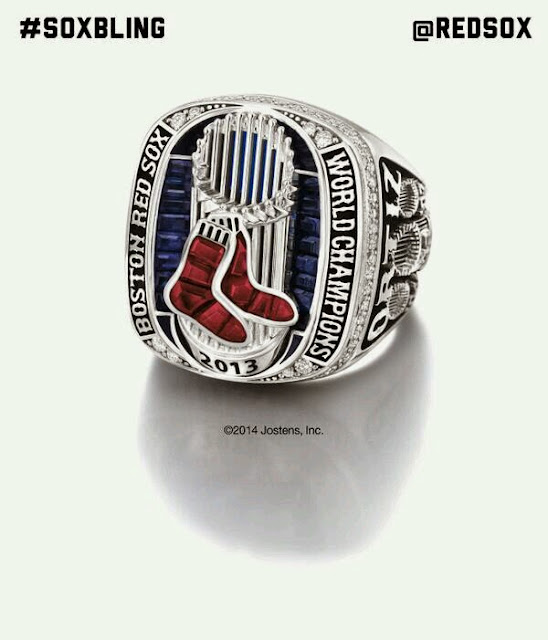 Posted by John Sharp at 1:34 PM No comments:

Baseball's Never Been Hotter with the Jacksonville Suns

The Sun's begin the season with a five game honest and with the Huntsville Stars.

This is my 34th baseball season living in Jacksonville, and I look forward to going to see the Sun's play again this year.

Posted by John Sharp at 6:57 PM No comments:

The El Paso Chihuahuas will take the field tonight for the very first time tonight on Reno, Nevada, vs the Aces.

Good Luck to the Chihuahuas. 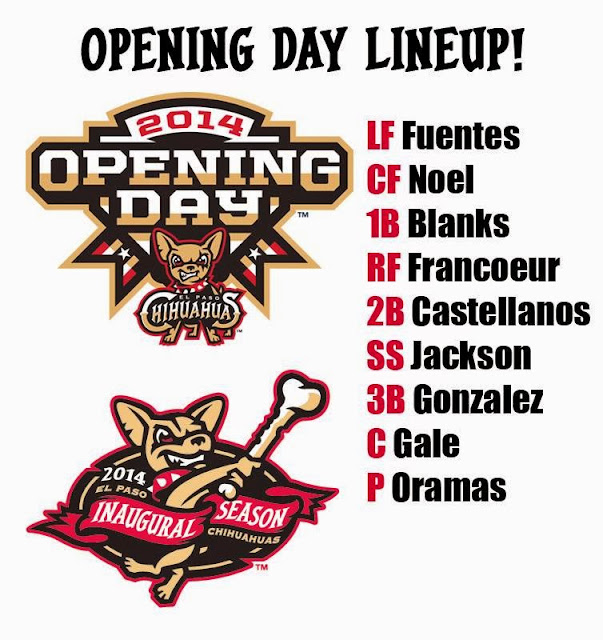 Posted by John Sharp at 6:17 PM No comments: