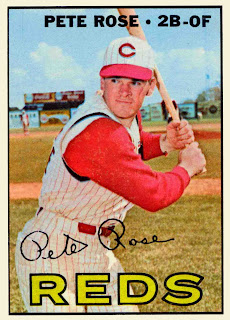 Peter Edward Rose, Sr.  was born in Cincinnati, Ohio, on April 14, 1941, and since making his big league debut on April 8, 1963, has been probably the most beloved Reds player ever.

Regardless of how you feel about Pete, and his banishment from the game since 1989 because of betting on baseball, what he accomplished on the field in 24 years was simply amazing.


Pete collected 4,256 base hits, a big league record that's highly unlikely to ever be broken.


Besides all the base knocks, Pete also holds these big league records...


In 50 years as  baseball fan I never saw any player play the game with the combination of pure ferocity and fun playing baseball.


I will always remember Pete playing in the '75 World Series against Boston, with that memorable head first slide into third base... 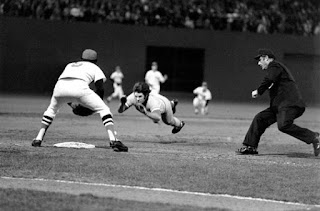 Charlie Hustle was an appropriate nickname for the player who ran to first base after a walk like he had just hit a ball into the gap in right centerfield and was on his way to a triple.

Pete played nearly every position on the baseball field as well... he played over 500 games at every infield position, and both left and right field.

Pete was a member if 3 World Series Championship teams, the 1975-76 Big Red Machine in Cincinnati, and the 1980 Philadelphia Phillies.

No one will ever be able to deny the greatness that was Pete Rose on the diamond, and only Pete himself is responsible for his breaking baseball's most valued rule, that no player or manager may bet on our National Pastime.

I'm not sure we will ever see Pete in the Baseball Hall of Fame, and I have always been in favor of him not being allowed into Cooperstown as well.


For as much enjoyment that Pete gave me growing up loving baseball, he simply betrayed the game, and its fans.


I would love to meet Pete one day, to meet the man that fuels the passion of so many Reds fans this day.


There are still plenty of Pete Rose fans who believe in him and that his rightful place in the HOF is warranted, and I salute them for their true love of the game, and always standing by him.


No matter your stance, Pete Rose will always be prominently on display in the games grand history.

Tonight we've lost another link to our childhood, as Paul Carey, longtime Detroit sportscaster, has passed away at the age of 88. 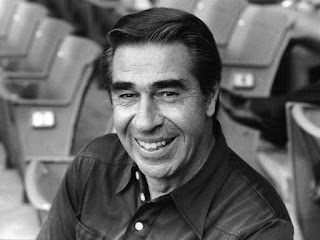 In 1973...although it somehow seems longer ago than that, Paul Carey joined legendary Detroit Tigers play by play announcer Ernie Harwell in the radio booth. 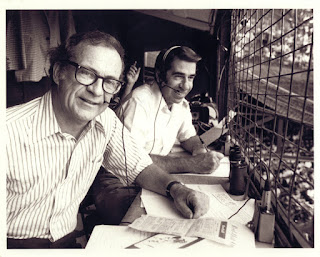 As a teenager and Tigers fan listening to games on the radio, Ernie and Paul not only described the ballgame being played, they taught us the rules, history, and passion of baseball played at the corner of Michigan & Trumbull Avenue in the Motor City.

We learned not only about how graceful Eddie Brinkman played shortstop, we learned about how Mickey Stanley moved flawlessly from center field to shortstop in the 1968 World Series, or how the great Billy Rogell turned double plays with Charlie Gehringer in the 1935 World Series.


We also learned about the other baseball games being played...on the out of town scoreboard...and after the Tigers games Paul would recap all the day's baseball on The Paul Carey Scoreboard Show."


We were spoiled, first by Ernie and Ray Lane, then Ernie and Paul Carey.


The mighty Ball Game in Heaven has another announcer, as Paul is joining in with the late Joe Garagiola, who passed away a couple of weeks ago.


Tonight we say a prayer for Paul Carey and his family, remembering the days of our youth, and the joy he gave us every time we heard "...Hello again everyone, this is Paul Carey."


Starting today it all counts. 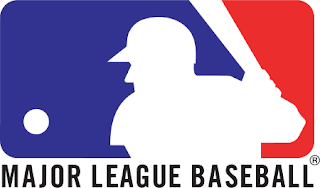 All 30 big league baseball teams start the day tied for first place, their dreams of winning the World Series Championship just a mere seven months and 162 regular season games away.


I've never been very good at predictions of what ballclub will win what division, what player will win that award, or win what team will win that final game to secure the final wild card spot in the playoffs.


The 2016 season begins with the defending champs, the Kansas City Royals, as the team to beat again, with just about every American League team capable of winning and beating the Royals...who are trying to become the first A.L. team to win three straight A.L pennants since the 1998-99-2000-01 New York Yankees.


The Senior Circuit has the champion New York Mets trying to repeat their World Series run of 2015, while the Pittsburgh Pirates try to stay out if another Wild Card playoff game...hard to do with the Cardinals and Cubs playing against you 19 times.

Zack Greinke took his pitching prowess from Hollywood to the Arizona desert to win a championship for the Diamondbacks for the first time since their 2001 World Series title over the Yankees.

...the Red Sox in the A.L. East, the Royals in Central...hey, until somebody beats the Champs...and the Houston Astros in the West.

I'll take my Detroit Tigers and Toronto Blue Jays to play in the Wild Card game, with my Tigers beating Toronto in Comerica Park behind Miguel Cabrera, Victor and J.D. Martinez, Justin Verlander, and K-Rod closing it out.


My Tigers will beat Boston in the Division Series, Houston will upset the Royals, and in the ALCS...the Astros will beat my Tigers in Game 7 in Houston behind Dallas Keuchel.

I know...you all thought I was taking my Tigers all the way...well, no, I'm not...I deleted that post, so there.

In the National League I like the Washington Nationals to win the N.L. East, the St. Louis Cardinals in the Central, and the Arizona Diamondbacks in the West.


In the Division Series I've got the Cubs vs. the Cardinals, with the Cardinals beating the Cubbies in 6 games...yes Cub fans, its still not your year...and the Nationals over Arizona.

In the NLCS I'll take the Cardinals over the Nationals in 5 games.


As for the World Series, I like the young Houston Astros, led by Jose Altuve and Carlos Corriea, to win the teams first ever Championship, in 6 games vs St. Louis.


OK, now, I'm sure there are many, many, baseball fans out there going hey...the Astros are your pick to win it all?

An easy puck would've been the BoSox in the A.L., and bring tge Mets back for redemption.

Hey, there are probably plenty of prognosticators out there saying just that...and they could be correct.


As for the baseball awards.... I'll take the Astros Jose Altuve and the Diamondbacks Paul Goldschmidt as league MVP'S...with the Cy Young Awards go to Justin Verlander of the Tigers (my one homer pick of the year.),  and Adam Wainwright of the Cardinals.

Well, there it is...not perfect I'm sure, probably completely wrong, however, I just can't do the easy thing and pick a Red Sox-Cubs World Series...that, I'm sure, may be more than baseball fans can handle.

I hope you all have a joyous big league baseball season...and please, try and remember...the players can't hear to yell at the TV or see your mean Tweet...enjoy the game...don't disect every pitch, every swing of the bat.