There's still time to get in on the 12th Annual Bowl Pick 'Em w/ Cards on Cards.
Now, I have to admit that, despite reading the contest post the day if came out, I just completed my entry tonight after his reminder post today, so, get your bowl picks in before the first bowl game of the 2021-22 season starts tomorrow at HIGH Noon.
I'm notoriously bad at these pick 'em things on ESPN, so I'm looking forward to my last place prize.
Thanks to Michigan Head Football Coach Jim Harbaugh for making this season an amazing one for all us Wolverines fans, and, of course, to Cards on Cards for this yearly contest.
Remember, head over to to the link above,create the rules, and get in on the fun.
Have a good time, and, as always,  Play BALL! 🏈
Posted by John Sharp at 10:27 PM 3 comments:

Tomorrow night in Indianapolis, Indiana, the #2 ranked Michigan Wolverines will play the Iowa Hawkeyes, ranked #15, for the 2021 Big Ten Championship in football.
Michigan Head Football Jim Harbaugh, the 1986 Big Ten Silver Football Award Winner, returns to Indianapolis were he played QB for the NFL Colts, from 1994-97. 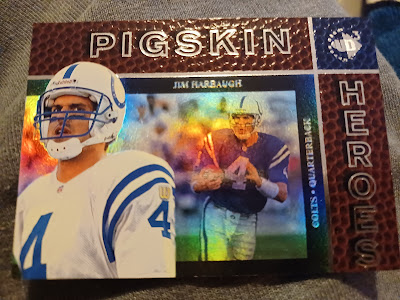 This card is pretty much emblematic of "Captain Comeback," as Harbaugh was known in Indy.
I can't even begin to imagine how nervous I'll be tomorrow night, as my beloved Wolverines try to win their first Big Ten Title game, and the teams first conference championship since 2004.
Harbaugh will always be one of my favorite Michigan players, especially now that he's cone back to Ann Arbor to coach the team.!
I started watching Michigan play football in 1976, and nobody in college football was tougher than Harbaugh was as Bo Schembechler's starting QB in 1985 & 1986. 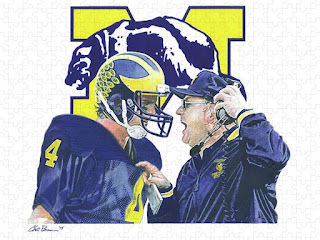 Here's hoping that the Wolverines can score against a very tough Iowa defense, one of the nation's best.
Have a great weekend...oh, yeah, Go Blue!
Posted by John Sharp at 8:22 PM No comments: