The New York Mets have been around since 1962, their inaugural season in the National League.

They have had some very good, even Hall of Fame players in the clubs 49 year history, including Tom Seaver, Nolan Ryan, Jose Reyes, David Wright, Darryl Strawberry, and Doc Gooden. 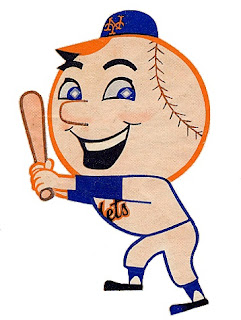 One of the coolest things about the Mets has always been the teams mascot, Mr. Met.

I have always thought Mr. Met was by far and away the best big league mascot.

The first time I remember watching the Mets play was in the 1973 National League Championship against the Cincinnati Reds.

Bud Harrelson, the Mets shortstop, got into a fight with the Reds Pete Rose as the two tangled up at a play at second base in the 5th inning of Game 3 at Shea Stadium.

In that game my favorite Met player ever, Rust Staub, hit 2 HRs for the Mets.

Now, at the time, I didn't know Rusty Staub would become my favorite player to play for the Metropolitans, I was just a baseball fan who loved to watch big league players and the playoffs were always great to watch.

What made Staub the one player I think of when I talk about the Mets starts with Staub's trade to my beloved Detroit Tigers in 1976.
Staub was pretty good in 1976, batting .299 with 15 homers, playing in the All-Star Game, and becoming the 1st player to play all 162 team games as a teams designated hitter.

In his three plus years with Detroit he hit 61 home runs, with 308 RBI.

Those three years with the Tigers were just a small part of Staub's 24 year big league career.

Rusty Staub started his career in the big leagues with the Houston Colt 45's and was traded to the Montreal Expos in 1969, and he became a fan favorite in Montreal, where he received his famous nickname, "Le Grand Orange."

As you can see, Rusty Staub played for a few teams, so why is he my favorite Mets player? 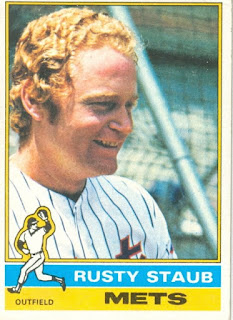 Staub was traded to the Tigers for Mickey Lolich, the best left handed pitcher the Tigers ever had, and the MVP of the Tigers 1968 World Series Championship.

I was horrified that the Tigers would trade Lolich, and so I started to learn more about Rusty.

Every time he would play on TV as a member of the Mets or the Tigers, the announcers would always comment on what a fine man Staub was, and he just seemed like the kind of player I wanted on my team.

They would show clips of his younger days with the Astros, Expos, and the Mets, and his former teammates always had great things to say about Staub.

Staring in 1981, Rusty went back in New York with the Mets, where he was a player/coach, and in 1983 Staub hit a MLB record 8 straight pinch hits, and 25 pinch hit RBIs.

I always had great respect for Rusty Staub, he played hard, got big hits in big games, and for that, as much as anything else, he is my Mr. Met.

Who's your favorite New York Met?

Is it Tom Seaver, Jerry Koosman, how about Marvelous Marv Throneberry?

Tell me who gets your vote as your fave Mets player.
Posted by John Sharp at 3:37 PM