Ronald Alan Swoboda was born on June 30, 1944, in Baltimore, Maryland.

Ron played baseball at Sparrows Point high school in Baltimore, and went on to NYU  and the University of Maryland.

In 1963 Swoboda signed  a contract with the New York Mets, and played one year of Double A ball in Williamsport, PA in 1964.

Ron smacked 19 home runs as a rookie, a Mets club record that would stand until it was broken by a young Mets rookie named Darryl Strawberry in 1983.

Swoboda had a terrific throwing arm from the outfield, and played at least 109 games for the Mets between 1965-1970.

Swoboda will be forever in the hearts of Mets fans for his diving grab of a sure extra base hit into right center field gap off the bat of the Orioles Brooks Robinson in Game 4 of the '69 World Series.

The great ninth inning defensive play saved the game for the Mets, who won the game, 2-1,  and went on to a 4 games to 1 series win over Baltimore.

In the middle of the 1971 season, Swoboda was traded to the Montreal Expos, where he played in just 39 games.

The Expos then traded Swoboda to the New York Yankees, where Swoboda would play through the 1973 season.

His last big leaguel appearance was with the Yankees, on September 30th, 1973.

After being released by the Yankees Swoboda went to Spring Training with the Atlanta Braves in 1974, but was released in March.

Swoboda tried another comeback in the spring of 1976 with his old team, the Mets, but didn't make the team.

After his playing days Ron worked in TV and radio broadcasting baseball games.

He lives with his family in New Orleans, Louisiana.

The 85th edition of baseball's mid summer classic is on July 15, and will be televised nationally by FOX.

Before I list my starters for each league, let me first explain what it's been like for me the first 3 1/2 months of the baseball season.

For the first time in a very long time I haven't been able to watch much baseball on TV.

I haven't had cable TV, or the Internet in my house since early March.

The only live games I've seen are the Saturday night games on FOX Baseball Night in America.

My smartphone isn't very good, either, and it won't stream games from MLB.TV.

So, all I've know of baseball is from my Twitter feed, my Facebook page, and articles and stats from the MLB At Bat APP.

I haven't seen one Detroit Tigers game on TV, but I follow my beloved team through the broadcast by Dan Dickerson and Jim Price through the At Bat APP.

I've also had a chance to listen to a few other broadcast games through the At Bat APP, and have done my best to follow the game as best I could.

OK, with that said, here are my choices, right, or wrong, for both the American and National League's starters for this year's game.

I've rooted for the American League every year I've been a baseball fan, and I like the fact that every team has a representative at the game.

My favorite All-Star Game will probably always be the 1971 game, held for the third, and final time at old Tiger Stadium in Detroit.

The American League won the game, 6-4.

The one thing I'm still waiting for is a All-Star Game MVP from a Tigers player.

Maybe Miguel Cabrera, Ian Kinsler, or Victor Martinez can make that happen this year in Minneapolis. 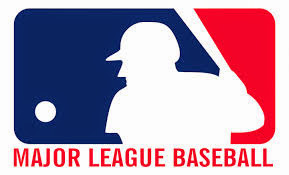 Posted by John Sharp at 1:26 PM No comments:

While playing minor league baseball Staub got into a bar fight, and was banned from playing baseball.

Staub found a law loophole that allowed him to change his name, and so Louis Staub Durham was given a new start in baseball.

While playing for Augusta of the South Atlantic League, he was chosen by the Brooklyn Superbas in baseball's Rule 5 Draft.

Durham played for Brooklyn, the Washington Senators, and the New York Giants.

Durham pitched in 155 minor league games, playing in Augusta, Altoona, Lancaster, Louisville, and finally in Denver of the Western League.

Posted by John Sharp at 1:16 PM No comments:

He played in the minor leagues through the early to mid 1920's, including spending time with Ty Cobb's Detroit Tigers in spring camp in1922.

Babe was one of the National Leagues best power hitters in his years in Brooklyn.

On his 13 years in the big leagues, Babe Herman played in 1,552 games, with the Robins, Reds, Cubs, Pirates, Cardinals, Tigers, and Brooklyn Dodgers.

Babe played his final big league game at age 42 for the Brooklyn Dodgers, on September 16, 1945.

Posted by John Sharp at 4:56 PM No comments:

The Vanderbilt Commodores are the 2014 NCAA Baseball Champions.

Vandy defeated Virginia 3-2 in the third and deciding game on Wednesday night on Omaha, Nebraska.

As you probably know, I love when baseball is featured on the cover of Sports Illustrated.

This week the magazine spotlights the young Houston Astros, including rookie slugger George Springer on the cover.

The Astros young squad is led by 24 year old shortstop Jose Altuve, who leads the American League in batting average, .337, and all of MLB with 105 base hits.

The Astros, in their second year in the American League, are in last place in the A.L. Central.

SI has the Astros headed out if the cellar soon, and has pegged the team as the 2017 World Series Champions.

Tonight at 7 pm on tigers.com fans can 're-live Game 5 of the 1984 World Series by watching a live stream 're-airing of the Tigers 8-4 Series clinching win over San Diego. 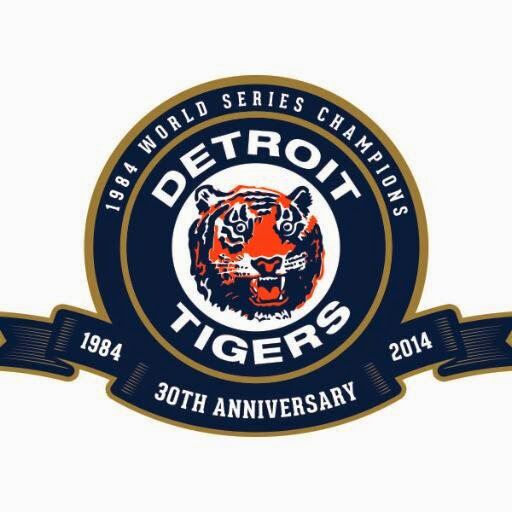 Posted by John Sharp at 2:55 AM No comments:

Jake played one year of college baseball at Delaware State before signing with Detroit as a amateur free agent in 1957.

Wood earned his trip to the big leagues with his performance at AAA Denver in 1960.

Jake Wood made his big league debut on Opening Day 1961, at Tiger Stadium, becoming the first African-American ball player to make his way through the Tigers minor leagues to the big league level.

In the 7th inning Jake collected his first big league hit, a two run HR off Jim Perry of the Cleveland Indians.

Wood played in all 162 games at second base in 1961, leading all American League rookies with 14 triples...and 141 strikeouts.

After playing in just 16 games in 1967, Wood was traded to the Cincinnati Reds, where he appeared in just 14 games.

Jake Wood was inducted into the Union, County, Delaware Hall of Fame, and resides in Pensacola, Florida. 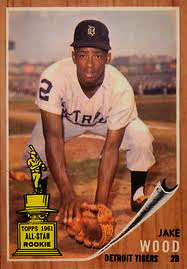 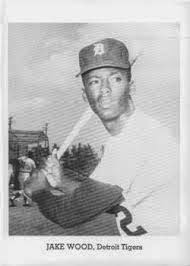 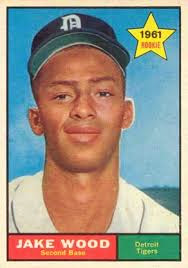 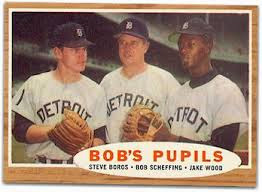 Posted by John Sharp at 5:15 PM No comments:

#Gehrig75
"I'm the luckiest man on the face of the earth." 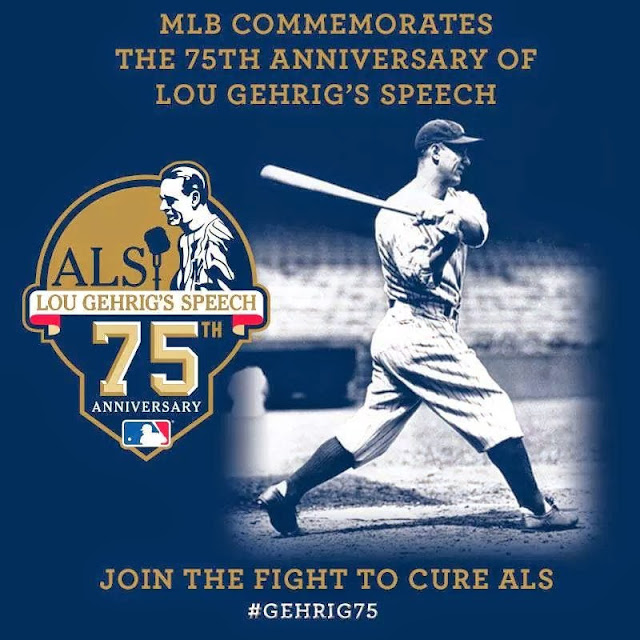 Posted by John Sharp at 6:38 PM No comments:

Hall of Fame big leaguer Tony Gwynn, the best left handed hitter in my lifetime, has passed away from Cancer.

God Bless Tony and his family. 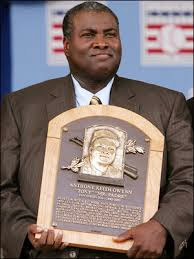 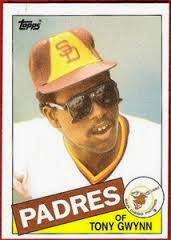 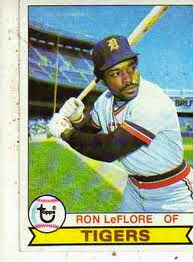 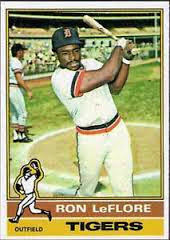 Posted by John Sharp at 1:20 AM No comments: 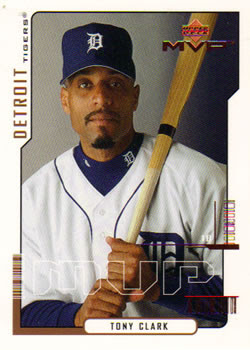 The Tigers drafted the 6' 8'' slugger second overall in the 1990 amateur player draft. 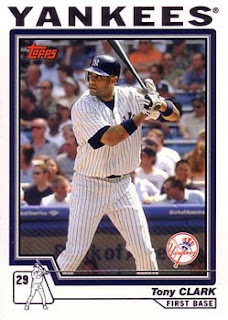 Clark made his mark slugging baseballs in Detroit from 1996-1999.

Tony played in one All-Star Game, in 2001, representing the Tigers.

Today Tony Clark is the Executive Director of the Major League Players Association. 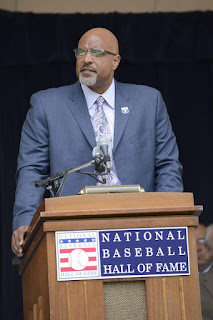 Play Ball!
Posted by John Sharp at 4:45 PM No comments: 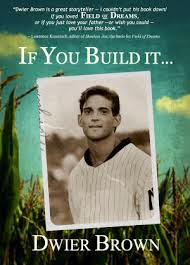 Posted by John Sharp at 2:35 PM No comments: 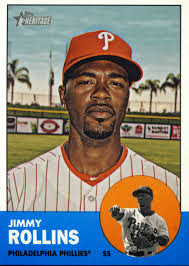 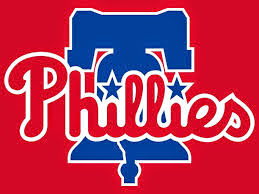 Posted by John Sharp at 6:18 PM No comments: 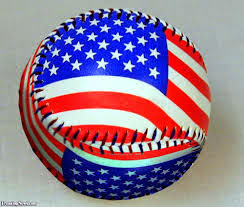 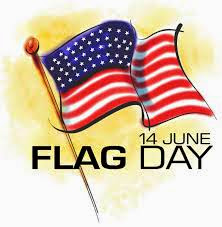 Parrish hit 212 home runs as a Tiger, caught a Jack Moris no hitter in April 1984, and won a World Series Championship with Detroit in '84.

The #13 was definitely a good thing for Parrish and the Tigers. 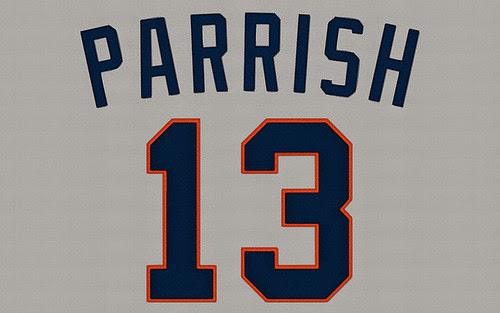 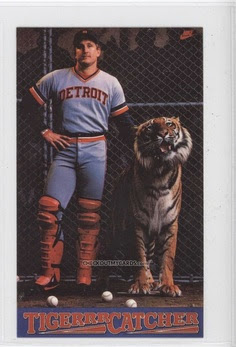 Today is the 75th Anniversary of the National Baseball Museum and Hall of Fame in Cooperstown, New York.

The first five players voted in by the Baseball Writers Association of America in 1936 were Ty Cobb, Babe Ruth, Bonus Wagner, Christy Matthewson, and Walter Johnson. 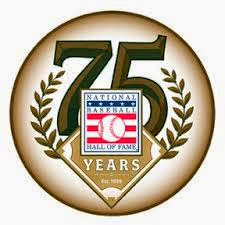 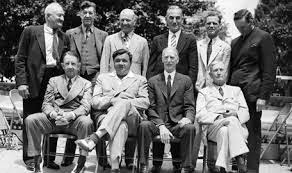 Posted by John Sharp at 3:26 PM No comments:

Actress Ruby Dee has passed away at the age of 91.

The Emmy Award winning and Oscar nominated actress, best known for her roles in A Raisin in the Sun and American Gangster, also starred in two baseball movies, both as a Brooklyn Dodgers wife.

In 1950 she starred as Rachel Robinson in the Jackie Robinson Story, alongside the future Hall of Fame ballplayer himself.

Ruby was friends with both Rachel and Jackie Robinson before the movie.

In 1977 Ruby starred alongside Paul Winfield as Ruthie Campanella in "Alive," a TV movie based on Roy Campanella's autobiography.

I'll always remember Ruby Dee for her being married to actor Ossie Davis, who passed away in 2005.

May God Bless her and her family. 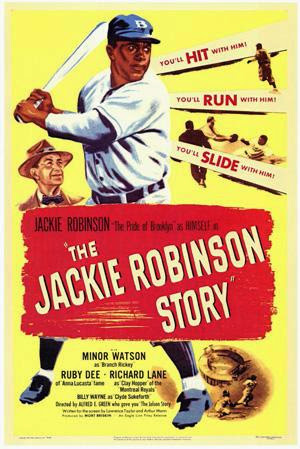 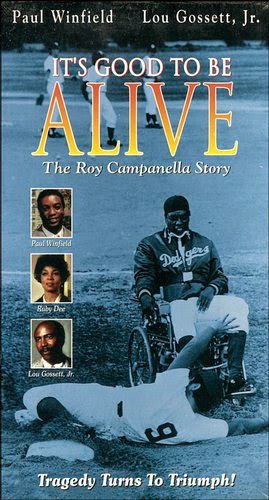 Posted by John Sharp at 2:10 PM No comments: