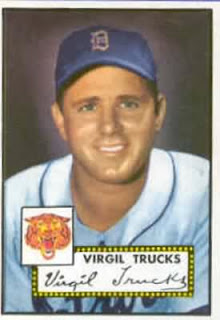 For us Tigers fans Trucks is a special, one of a kind ballplayer.

On May 16th  Virgil no-hit the Washington Senators, and on August 25th he blanked the New York Yankees, and both games were 1-0 Tigers wins. 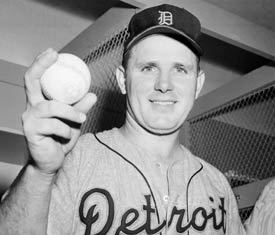 Thanks to William over at the Foul Bunt blog for reminding us of Virgil Trucks milestone today.

Posted by John Sharp at 7:37 PM No comments:

There comes a time in every big league players career when it's just time to move on, time to leave the team that drafted you, brought you to the majors, and gave you your chance to play baseball on the biggest stage in sports.

Brandon Inge was released today by the Detroit Tigers.

For 15 years, starting with his being drafted by the Tigers in 1997, Brandon Inge has known only one organization, until today. 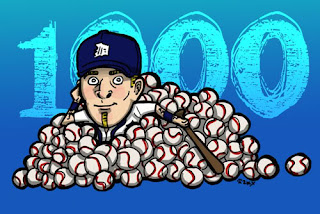 Inge was drafted by the Tigers in 1997, and in 2000 he played 78 games here in Jacksonville, for the then Tigers AA affiliate, the Jacksonville Suns.

Brandon Inge made his big league debut on April 3rd, 2001, the first of what would become 1408 big league games in 12 years.

Thanks to Roar of the Tigers for the art work.

I have a soft spot for Inge, in part, because he played here in Jacksonville, and he got to play baseball for my team, the Tigers.

I will always be a pro Inge fan, but then, I'm a pro Detroit Tigers fan, a fan whom doesn't boo ballplayers on his favorite team.

I've still got no idea why fans boo players on their team. What good does it do?

Myself, I think players feed off the vibes of fans, and cheering for them, as you should, is so much better than booing the player.

Inge will always be known for his hustle, his love of the game.

Inge played every pitch, every inning, every game, all out, 100%, at bat, in the field, and in the community.

Before today's Miguel Cabrera HR, in a loss to the Mariners, Inge was the Tigers player with the most career HRS at Comerica Park.

Now Brandon and Miguel are even, 77 long balls each.

Inge detractors will no doubt bring up the fact that Inge took 11 years to hit those 77 HRS, while Cabrera has done it just since his arrival in 2008.

I know it was time for Inge to be let go by the Tigers, he just isn't the player he used to be, and the Tigers just don't have the roster space any more.

With the addition of 1B Prince Fielder this past off season, Miguel Cabrera moved to 3rd Base, the position were Inge was at his best.

That rocket arm from the hot corner, after a diving stop of a ball headed for the left field corner, those hustling plays catching foul balls, some headed into the Comerica Park stands, only to find Inge's glove for an out.

Brandon Inge had power at times as well, hitting 27 HRS in 2006, as the Tigers won the American League pennant, and again in 2009.

One of the best times for Inge, and us Inge fans, came in 2009, when Inge was named on the Final Ballot for the All-Star Game.

The fans came through, made all 25 on line votes allowed, and we Tigers fans got Brandon into the Mid Summer's Classic. 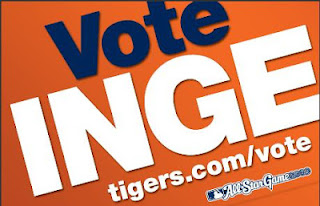 140 times as a Detroit Tiger Brandon Inge swung, hit the baseball over the fence, circled the bases with a HR, cheered by Tigers fans, at home, and on the road.

Thanks for wearing the Olde English Detroit Tigers "D" with pride, with heart and soul, every at bat, every play in the field, every game, for 12 years.

This Tigers fan will miss you. 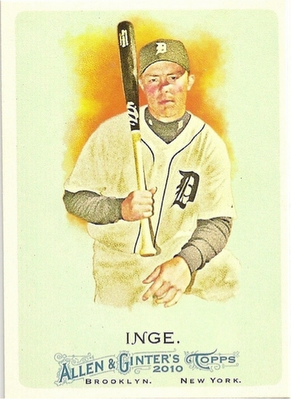 Posted by John Sharp at 5:50 PM No comments:

With the celebration of Fenway Park's 100th Anniversary, and the Red Sox playing the New York Yankees last weekend, Kieth Olbermann, who's quite the baseball fan, and writes a baseball blog on MLBlogs.com, The Baseball Nerd , has a great series of articles on the Yankees/Highlanders nickname.

Or, was it the New York Yankees?

Olbermann has dug up some interesting stuff on the Highlanders/Yankees name, check it out.
Posted by John Sharp at 7:28 PM 3 comments:

A special place for Pudge Rodriguez

Ivan "Pudge" Rodriguez retired today, back in the heart of Texas, where he began his big league career 21 years ago. 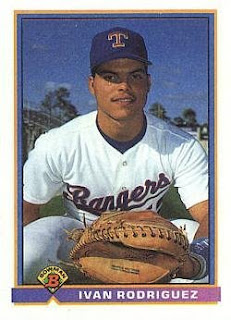 I will always have a special place in my baseball fan life, and my personal life, for Pudge Rodriguez.

Not because he signed as a free agent with my team, the Detroit Tigers, a team Pudge made relevant once again just by signing his name.

That four year contract was the start of the Tigers as we know them today, even though Rodriguez has been gone several years now. 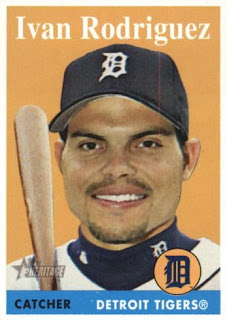 He was the start, bringing a business attitude and excitement the Tigers needed

That in itself makes Pudge special for Tigers fans, but for me, and my future wife, he would become something very special between us.


In the spring of 2005 my now wife and I had been dating for a few months when she came over to my apartment on night with dinner.

I had the Tigers game on TV, and as Rodriguez was coming to bat, Mario Impemba says..."that brings Pudge Rodriquez to the plate."

All my future wife heard was "Pudge," and that got her upset.

"How rude," she says, that's not a nice thing to say about someone."

Now, we baseball fans know why he's called "Pudge," we know it's a badge of honor, as it was with Pudge Fisk of the Red Sox back in the 1970's, one Hall of Fame catcher to another who would one day be in the HOF. 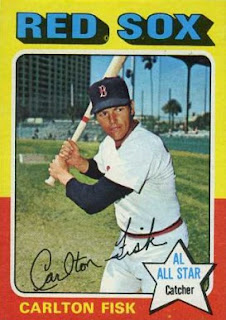 Before that moment, my future wife, Tracy , had no idea who Pudge Rodriguez was, why he was called that, or any other things about baseball.

She knew I was a Tigers fan, and that was it.

However, from that point on, a few things happened.

First, I had the opportunity to teach someone about the great game of baseball, including why Rodriguez was given his nickname.

Second, it made me look smart to someone I was dating, and that is always good.

Third, and the most important, I guess, is that Ivan "Pudge" Rodriguez made himself a fan for life with Tracy (well...she didn't like him as a Yankee at all.), a fan who knew nothing about him, or baseball, until that night back in 2005.

In 2006 we ventured down to Lakeland, Florida for a Spring Training game at the Tigers home, Joker Marchant Stadium, and Tracy was just as excited to see Pudge play as I must have been some 40+ years ago when I was watching Bill Freehan, my hero, for the first time.

The story I tell you is what makes baseball special, the story telling, the teaching, the love of the game passed on down.

Pudge Rodriguez was a Hall of Fame catcher long before that chance encounter through the TV seven years ago, but the bond he created between myself and Tracy, through baseball, is part of our history together, as it will be forever, and for that, I'm forever grateful to him. 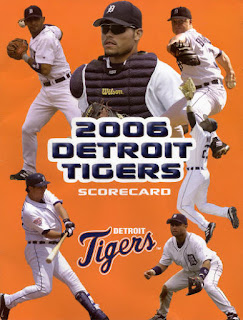 Posted by John Sharp at 4:26 PM No comments: