Today is all about the kitty cats.

Now, I didn't wake up knowing it was a day for feline celebrations, but that changed when PAWS, the Official Detroit Tigers team mascot, posted this cool selfie today on Twitter.

As the proud owner of two new kitties myself, I'm going to make sure to give extra hugs and kisses to Mr. Paws and Miss Salem today.

In case you were wondering, yes, Mr. Paws was named after PAWS.

The San Francisco Giants have a 3 games to 2 lead in the World Series over the Kansas City Royals, with Game 6 tonight at Kauffman Stadium in KC.

We always love when baseball makes the cover of a magazine, and this week Sports Illustrated has the Giants Hunter Pence swinging a hot bat against KC this past weekend at AT&T Park.

The Giants give the ball to RHP Jake Peavy tonight on what could be the clinching game for the Giants 3rd World Series Championship in 5 years, cementing the Giants baseball dynasty run since 2010.

The Royals counter with RHP Yordano Ventura in the must win game for KC.

In 1985 the Royals returned home trailing the St. Louis Cardinals 3-2 in games, won the controversial Game 6 and then blew out St. Louis 11-0 in Game 7 to win the only World Series in franchise history.

I'd like to see a KC win tonight, just because I want a Game 7 tomorrow night.

This has been a fun series to watch, as a pure baseball fan with no rooting interest one way or the other.

I hope you all enjoy the game tonight. 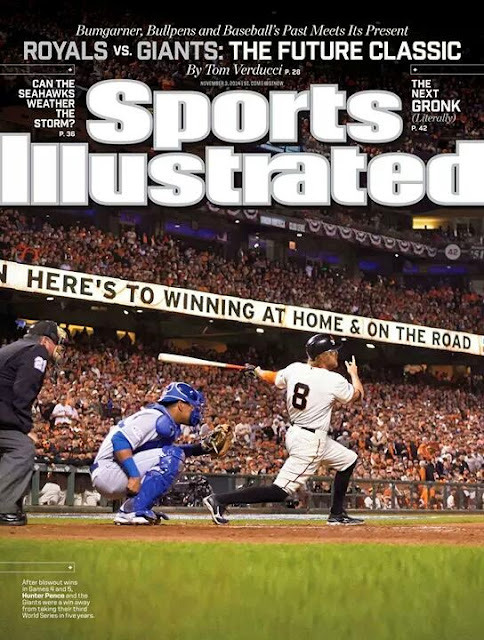 This is the 57th year that Rawlings has handed out the Gold Glove to the best big league ballplayers on the baseball diamond.

The American League finalists are...

The winners , sponsored  by Dicks Sporting Goods, will be announced on Baseball Tonight on ESPN2, on Tuesday, November 4th, at 7 pm.

The voting process is made up of a 75/25 (approximate) split among big league managers/coaches and SABR SDI.

Managers/Coaches  vote is Intra-League only, and they cannot vote for players on their own teams. 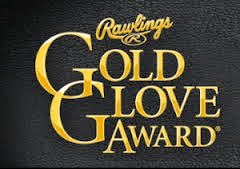 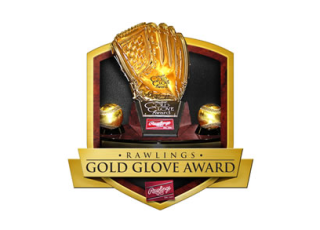 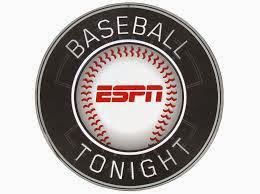 Posted by John Sharp at 6:05 PM No comments:

Steve is celebrating birthday #38 today, in of all places, Portage, Michigan, where I grew up and went to high school.

One of Steve's passions is to get former ChiSox slugger Harold Baines into the baseball Hall of Fame.

Check out his blog, or go to
@WhiteSoxCards
on Twitter to give Steve a
#HappyBaseballBirthday shoutout. 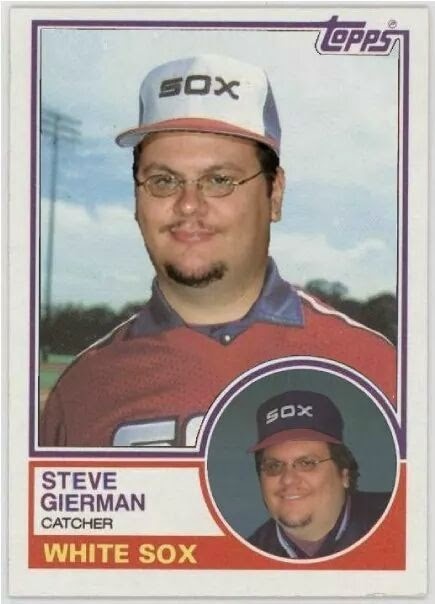 Posted by John Sharp at 1:13 PM No comments: 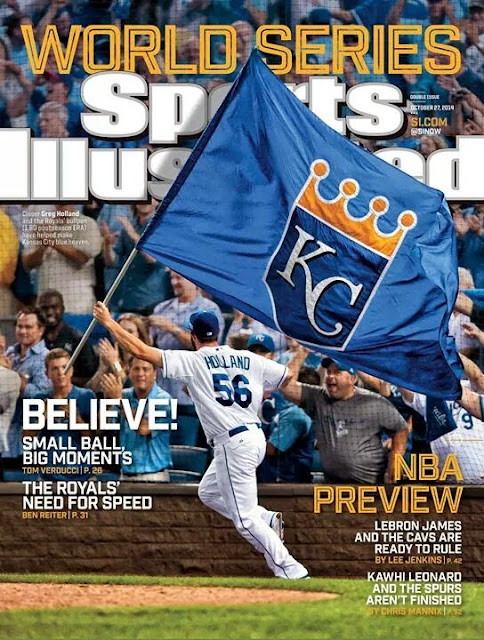 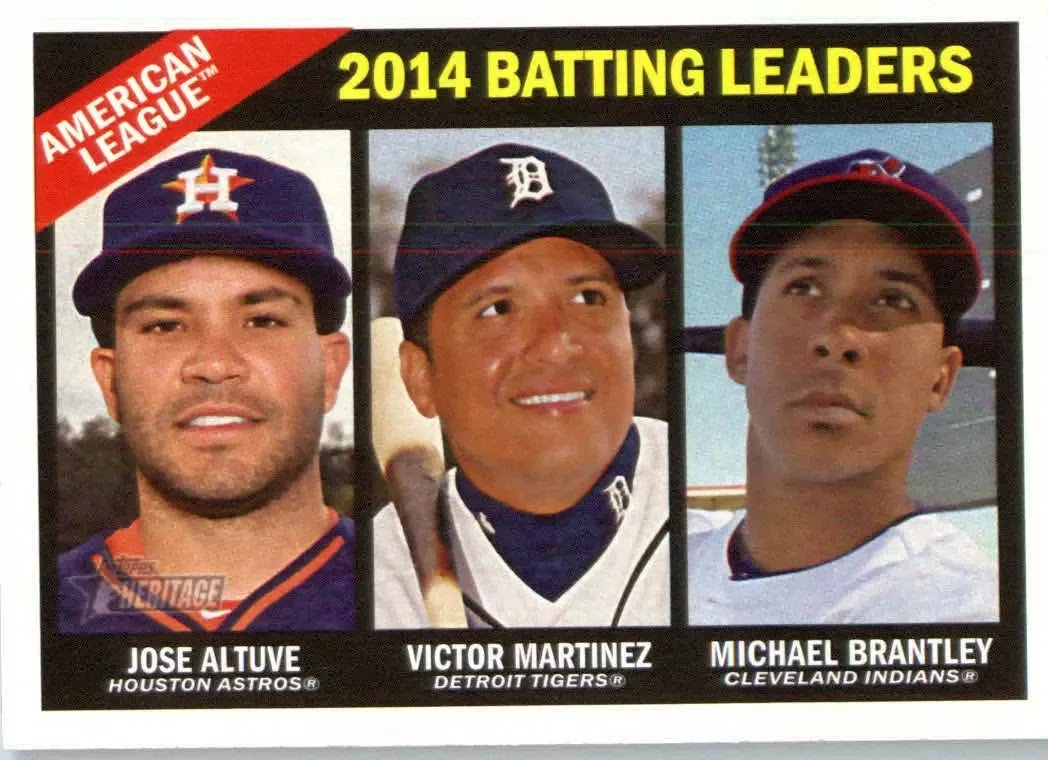 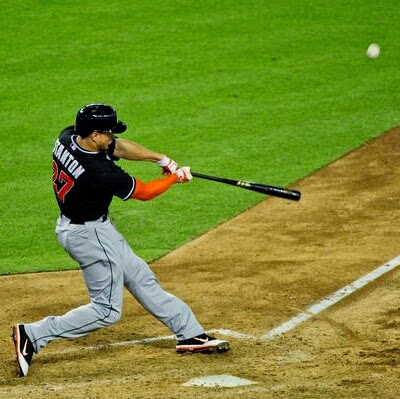 Play Ball!
Posted by John Sharp at 7:35 PM No comments:

The BBA is a membership of over 200 dedicated baseball bloggers, and I'm honored to be a member of the general baseball category.

Because I write a generic/ general baseball blog I am able to vote for award winners in both the American League and the National League.

My votes are counted in with all the other voters in my category,  and the votes are totaled up for the final votes.

Before I reveal my winners in the Walter Johnson Award  for the top pitchers in each league,  I must be honest to you, my readers, on how I decied the top five pitchers and winners.

For the entire baseball season of 2014 I had no cable or satellite TV service.

My baseball TV viewing was relegated to the few FOX games of the week and the annual All-Star Game.

I was also able to watch some ball games on MLB.TV,  the FREE Game of the Day, and then several Detroit Tigers games the last two weeks of the season.

I must also remind you, as I try and do every year, that I will never vote for any player who has used steroids, HGH, etc.

So, for instance, I refuse to acknowledge any stats by know steroids users.

There are two exceptions... OPS for hitters, and WHIP for pitchers.

Yes, I understand I'm considered a baseball stats dinosaur,  but thats OK, I actually appreciate that I still love baseball and its traditional statistics.

OPS and WHIP are SABR stats that I understand and recognize as valuable stats.

There are no right or wrong choices for fans, its just our opinions.

I hope to at the very least to be able to have good baseball conversations with all baseball fans, and will never argue that their choices are wrong...their choices are to be respected , and I hope they feel the same.

OK, with all that said,  here are my choices for the Walter Johnson Award...

I did as much research as possible,  combining over stats for as many pitchers as possible.

My goal is to do as honorable job at voting with the information I've collected.

Many fans will say that Felix Hernandez should be the clear cut winner in the A.L., or wonder why Chris Sake or Phil Hughes arent on my list.

Some of my fellow Detroit Tigers fans will wonder why I didn't vite Max Scherzer, the defending A. L. CY Young Award winber, #1 on my list,  and will argue David Price should be in my top five list.

I'm pretty sure no one will complain about the Dodgers Clayton Kershaw as my #1 choice, and I believe the Reds Johnny Cueto deserves his #2 place on my list.

Again, I did my best,  and wish all my fellow bloggers good luck in their voting this year.

My next post will be for the annual BBA Stan Musial Award for leagues MVPs.

Posted by John Sharp at 3:21 PM No comments:

This is my official ballot for the 2014 Goose Gossage Award as a member of the Baseball Bloggers Alliance.

In the Ameican League my vote goes as follows...

Posted by John Sharp at 5:55 PM No comments:

The Baseball Bloggers Alliance announced the the winners of their annual Connie Mack Award today.

In the American League, Baltimore Orioles manager Buck Showalter is the landslide winner, beating out Ned Yost of the Kansas City Royals and Mike Sciocia of the Los Angeles Angels of Anaheim.

For complete story and balloting follow the link below...

Here are my picks for this years Baseball Bloggers Association Connie Mack Awards for the top managers this year in big league baseball.

Next up for the BBA Awards will be the Goose Gossage reliever of the year awards.

Each year the 200+ members of the BBA vote on the traditional big league baseball awards as a group.

As a general baseball blog I always vote for winners in both leagues.

We start with the Willie Mays Award for Rookie of the Year.

My next BBA Award post will be for the Connie Mack Award for the top Managers in big league baseball.