In today's first at bat, on the first pitch Cabrera saw, he hit a 2 run HR to start the Tigers on their way to a 6-3 won over the Royals. 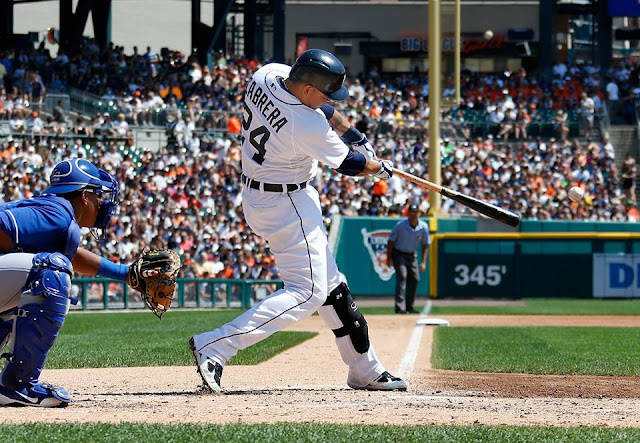 Posted by John Sharp at 4:47 PM No comments:

65 years ago today the original Sultan of Swat, George Herman "Babe' Ruth, passed away at age 53.

No one played baseball with more joy and gusto than The Babe.

He was bigger than life, loved children, and was baseball's biggest star.

The debate about who the best of the best of big league ballplayers was, it seems to always come down to Ruth, Ty Cobb, Willie Mays, or Ted Williams.

To me there is no clear cut winner.

Cobb is the best hitter who ever grabbed a bat.

Ruth is the best power hitter ever, and he changed the way baseball was played,  from the station to station of the Deadball era to today's power game.

Williams was a great hitter who missed five years if his prime to two wars, a man who pioneered how batters approached the game.

Mays is, some argue, the best all-around player when the five tools, hitting, hitting for power, base running, defense, and speed are considered.

A case has been made over the years for all of the above players.

When it comes right down to it, hitting 714 home runs, batting .342, AND winning 94 ball games as one of the best pitchers in baseball, well, the Great Bambino is hard to beat.

Today is officially "Left Handers Day."
I have to admit, until today, I didn't really know their was a day just for the lefty's, nor did I know there was a web site just for left handers.

So, with baseball fan writing blog posts, sending Tweets, posting Facebook "likes",  about their favorite left handed hurlers, I thought I'd send a shout out for a Detroit Tigers hero.

Mickey Lolich is the best left handed pitcher the Tigers have ever had.

Mickey was traded to the New York Mets for OF Rusty Staub after the '75 season.

Mickey finished his big league career with the San Diego Padres in 1978-79.
The number Mickey Lolich wore, #29, has continued to be issued by the Tigers.
38 years.
From Steve Foucalt To Danny Worth, the Tigers have somehow managed,  without just cause by this fan, to allow the number to be worn by subpar players.
One day it would be great to look out to those famous statues and see Mickey and Bill Freehan immortalized in bronze.
I think Tiger fans need to remember that the Tigers have been an American League institution since the start of the league, in 1901.
The Tigers have done a terrific job putting together a World Series contending team
That said, the Tigers need to honor the past as well.
After the Cardinals Tim McCarver popped up the final pitch of the World Series, the ball fell safely into the mitt of Tigers catcher Bill Freehan.
Freehan turned around after catching the laat out, turned around to celebrate, and caught Mickey Lolich jumping with joy into Freehan's arms.
The Tigers need to honor that moment, those two baseball heros, Detroit Tigerd heroed.
This what the statue should look like.

Thanks to the Detroit Athletic Company for this photo of the 1968 Champs from the Motor City.

The Detroit Tigers won 103 games and ran away with the '68 American League Pennant.

The '68 Tigers were the last pennant winning A. L. team before baseball expansion in 1969.

In the World Series against the St. Louis Cardinals, the Tigers rallied from a 3 games to 1 Cardinals series lead,  winning the final three games.

The Tigers victory was the third in team history.

The 1935 and 1945 Tigers teams were Detroit's previous big league champions.

The Tigers have played in 12 World Series.

Besides the above mentioned champs,  the Detroit Tigers also won the 1984  World Series.

Who's your favorite player from the '68 team?

Is it the Series MVP, LHP Mickey Lolich?

If you follow this blog, you know my answer.

Vin Scully, Voice of the Los Angeles Dodgers,  Tweeted this link for ESPN Sunday Night Baseball this week.
The Dodgers host the Tampa Bay Rays at 8pm.
Terrific is an understatement for the promo.
https://www.youtube.com/watch?v=SPyX9xZamRc&feature=youtube_gdata_player
Posted by John Sharp at 3:17 PM No comments:

Today we celebrate a great moment in baseball, the very first broadcast of a big league game, on KDKA Radio, in Pittsburgh.

Harold Arlin was the man behind the microphone as the Pirates defeated the Philadelphia Phillies, 8-5, at Forbes Field in Pittsburgh.

Arlin, just 25 years old, was seated in a box seat on the field level at Forbes Field, describing the action between the Phillies and the Hometown Pirates.

For 92 years now baseball fans have grown to love our National Pastime.

Fans have learned about the game trough storytellers and wordsmiths like Harold Arlin, Ty Tyson, Mel Allen, Red Barber, Vin Scully, Harry Carey, Jack Buck, and of course, Ernie Harwell, the Voice of the Detroit Tigers during my youth.

Today I listen to the Detroit Tigers games described by Dan Dickerson, the current Voice of the Tigers, along with former Tigers catcher Jim Price.

Locally here in Jacksonville, Roger Hoover is the Voice of the Suns.

Please feel free to comment on your favorite baseball announcer, and why you love baseball on the radio.

Posted by John Sharp at 1:10 PM No comments:

Growing up as a die hard Detroit Tigers fan in Kalamazoo, it was always hard for me to understand why any boy, especially my brothers, would ever root for any other team.

To my dismay that's exactly what two of my brothers did.

Joe, my youngest brother, is the other sensible baseball fan, and is still a Tigers fan.

The Tigers were World Champions in October '68...talk about a good luck charm

Decades later he's still a fan of the Cubbies, having suffered year after year for his shaky decision.

Then there's my brother Robert.

Many years ago he turned to the darkest parts of baseball fans...he became a part of the evil empire known as New York Yankees fans.

Thirty-four years ago, on August 2nd, 1979, my brothers second favorite player, Munson, died while piloting a small plane in Ohio.

It's sad to me, but when I hear Thurman's name come up, it always reminds me of that horrible plane crash.

As a baseball fan I should be remembering how great a ballplayer Thurman Munson was, not how his life ended.

Munson was a feisty guy behind the plate.


My most vivid memory of Munson on the baseball field is actually a brawl that took place between the Yankees and Boston Red Sox.

The fight started because of a collision at home plate between Munson and the BoSox Carlton "Pudge" Fisk.

Munson was the Yankees team Captain, and he refused to let the opposing teams dictate how the game would be played.

No one was going to push the Yankees around while Munson was behind home plate.

The Bronx Bombers twice defeated their long tine rivals, the Los Angeles Dodgers,  in '77 and '78, to become Workd Champions.

Thurman Munson played 11 years in the Bronx, starting with his big league debut on August 8th, 1969, at age 22.

Whenever we get together and talk baseball Robert always made sure to get a few words in about his guy Munson..."old Thurm" as he calls him.

I still remember a Monday Night Game of the Week on ABC the night of Munson's funeral.

The Yankees played with heavy hearts, not a dry eye at Yankee Stadium.
The Bronx Bombers beat the  Baltimore Orioles, 5-4.

All five  of the Yankees runs were driven in by my brother Robert's favorite ball player, Bobby Murcer, Munson's best friend.

Today we remember a Yankee legend, and one of my brothers favorite players.

Posted by John Sharp at 6:08 PM No comments: