Another in a continuing series looking at my favorite players from every big league team, past and present.
The Brooklyn Dodgers haven't played a game since September 29, 1957, and yet their legacy is still entrenched in baseball's glorious past.

Today's I write about my favorite Brooklyn Dodger of All-Time, Jackie Robinson.
The Dodgers move to the West Coast and Los Angeles left baseball fans in Brooklyn without a big league team to root for, and as the team left, the souls of Brooklyn's fans left to.
Growing up in Kalamazoo, Michigan, I was of course, a Detroit Tigers fan, but I was also a baseball fan in general, and I loved reading about the game's glorious past, and listening to my Uncle talk about the game, and the teams of his youth.
My Uncle would tell about my Grandmothers dislike for the Yankees, and how she would root for the Brooklyn Dodgers against the Yanks in the teams epic World Series match ups of the time. I soon started reading books on the Dodgers, and what I found was just terrific. 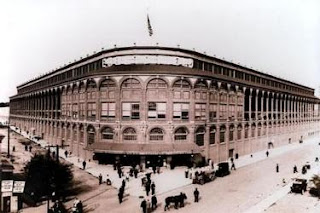 Part of the charm of the Brooklyn Dodgers is Ebbets Field, the beloved stadium that the Dodgers called home.


Built by owner Charlie Ebbets, the ballpark is steeped in baseball lore. It opened in 1913, and stood as the cornerstone of the Dodgers franchise until the team left in 1957.

The Brooklyn Dodgers are my favorite team that no longer exists. Yes, the franchise still plays on in L.A., and I do like the Dodgers, but there is just something special about the team when they played in Brooklyn.
Jackie Robinson is the Greatest Dodger of All-Time! I just love Jackie Robinson.
If I were to ever get a Throwback Jersey of any team other than the Tigers, I would buy a Brooklyn Dodgers #42 of Jackie Robinson.
Jackie was as beloved a player as the Dodgers had, even amongst the racial hatred of the time. Dodger fans were soon taken by their great ballplayer, that's what they saw, a ball player, not a black man, a man, and he was a Brooklyn man.
He was a great ballplayer, yes, but he was also a great man, who endured serious racial attacks when he broke baseball's color barrier when he made his debut with the Dodgers on April 15, 1947. 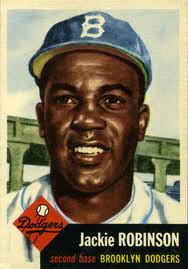 Jackie was exciting!
Look at the old clips of Jackie and you see one of the most exciting players in the history of big league baseball. Jackie was aggressive at the plate, he was aggressive running the bases, stealing bases, he was even exciting in the field, making spectacular plays with his glove, and his arm. 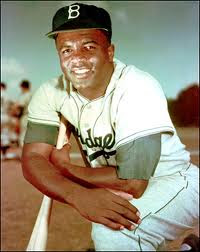 Jackie was a great all around player, who hit for average, for power, who could throw, field, and steal bases.
Before Brooklyn
Robinson came to the Dodgers late for a rookie, he was 28 years old in 1947, and one could only imagine what he could have done had he been able to play earlier.
Before he got to the big league Jackie also played in the Negro Leagues, for the Kansas City Monarchs, in 1945, and then played for the Montreal Royals, in the Dodgers farm system, in 1946.
Jackie Robinson...10 years as a Brooklyn Dodger
The 1947 Major League Rookie of the Year
The 1949 National League Most Valuable Player
Six time All-Star, 1949-50-51-52-53-54
A member of the 1955 World Series Champion Brooklyn Dodgers
Elected into the Baseball Hall of  Fame, 1962
.311 Lifetime batting average
1,518 hits
137 Home Runs
734 RBIs
187 Stolen Bases
Jackie Robinson was honored by Major League Baseball on April 15th, 1997, the 50th Anniversary of Jackie's breaking the baseball color barrier, by retiring his #42 throughout big league baseball. 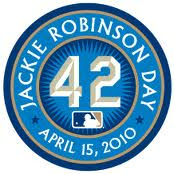 Every April 15th Major League Baseball celebrates the life of Jackie Robinson.
This year is the 63rd Anniversary of Jackie's big league debut at Brooklyn's Ebbets Field, and his lasting memory is as great as it has ever been, as both a great ballplayer, and a great man.
Posted by John Sharp at 2:46 PM