Every once in while baseball comes up with a special player, a guy who pays for the admission price of the ticket every time he takes the field.

The Detroit Tigers have one of those special players.

Tigers right handed pitcher Justin Verlander showed up tonight at Comerica Park in downtown Detroit, walked out to his position on the pitching mound, and began to mesmerized 40,000+ baseball fans, striking out 12, and  tossing a 1-hitter at the Pittsburgh Pirates. 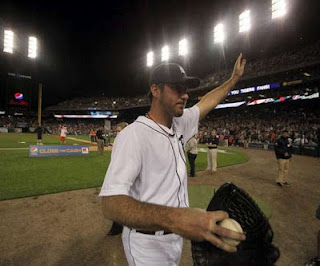 One hit, a one out single to center field on a 1-2 count, ugly looking swing from the Pirates lead off hitter, Josh Harrison, with one out in the ninth, was the only hit for the Buccos, and spoiled what would have been the 3rd career no-hitter for baseball's best pitcher.

The reigning American League Cy Young and Most Valuable Player, Verlander is starting to put together another spectacular season for the Tigers, and is most certainly looking like a shoo-in to be the starter for the A.L. in the All-Star Game in Kansas City.

If your a baseball fan, especially a Detroit Tigers fan, there is no chance of ever missing a start by Verlander.

The final pitch of Verlander's 16th career complete game, was a 99 MPH fastball  that the Pirate's Andrew McCutcheon grounded weekly to Tigers shortstop Jhonny Peralta for the final out of the game.

51 times in a row now...51 times, Verlander has started a game and pitched at least 6 innings.

Last year Verlander won 24 games, and that was after a bad start early in the season.

If you're on Twitter, you need to follow Verlander, he's very active, and get's the fans involved in his tweets...go to @JustinVerlander.

Justin Verlander ‏@JustinVerlander
That was a lot of fun tonight. Crowd was awesome! Gives me chills thinking about it. #closebutnocigar

I wasn't old enough to see Sandy Koufax, but I'm here to see the next best thing, Justin Verlander.

Just over two years ago, in April of 2010, I found out I could create my own blog, and could write about anything I wanted to.

I have been a baseball fan for over 40 years, my favorite sport since I was a little kid, and so writing about baseball just seemed to be right.

Today I write this post to say Thank You.

Today this blog has reached the 50,000 mark in page views.

I write about baseball because it gives me pleasure, it makes me think about playing baseball on the sandlots and back yards of Portage, Michigan, where I grew up, and where I played Little League baseball.

Baseball has been around a long time, since when, no one really knows, but it has always held a special place in America, and it always will.

The ratings on TV might not be as big as they once were, but baseball fans have so many new ways to follow the game than we did 40 years ago, that the passion of true baseball fans remains as solid as it ever was.

Baseball is special because of the fans who follow and love the support, and without fans there would be no baseball blogs, and that would be a shame.

Fans fuel baseball, their love of the game, a team, a player.

I write about baseball because it has given me the greatest joy in my life, like learning to field a ground ball, catch a line drive, and to smack a double to the fence.

Baseball is a special game, and the ability to write about baseball is a true blessing from above.

To you, the baseball fans who've come to my blog, I say thanks, I hope you've enjoyed reading about the grand game, through this baseball fans eyes, ears, and fingers.

Posted by John Sharp at 6:17 PM No comments: