Sometimes I know that I'm more blessed than I deserve, and today's mailbox is one of those times.

Last week as I was reading through my blog roll and I came across the headline 2018 Stadium Club Inserts Up For Grabs, and headed on over to Baseball Every Night to check it out.

I hadn't been able to pick up any Stadium Club yet, and I was curious to see if Peter had pulled and interesting cards, and maybe, just maybe, there was a Nicholas Castellanos or Miguel Cabrera in the mix.

Neither of those Tigers were on Peter's list, but as I scrolled down through the names I saw this...

Had anyone asked for this card yet...I was sure that I was late to the party, as is usual, but, amazingly to my surprise, the card was still there, and I quickly posted my choice.


I had just seen a similar Niko Goodrum card on my friend Alex's Twitter feed, and so I knew what the card looked like.


Within a few minutes I has received a message on Twitter from Peter that the Niko card was mine, and that he'd have it to me the next week.

This beautiful card arrived at my house on Monday, and it's become my favorite card of 2018 to enter my collection. 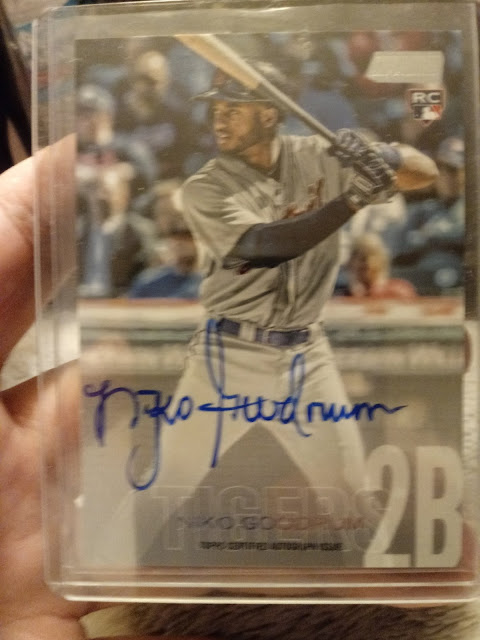 The surprise find this year so far for the Tigers, Niko Goodrum has pretty much done anything the team has asked of him in his first year in the Motor City, playing every infield position except catcher, playing both left and right field, as well as being a DH.


Defensively Niko has proven to be a solid big league defender, sporting a .970 fielding percentage, with 8 errors in 181 chances.


I'd like to thank Peter again for not only the card, but for being a terrific baseball fan and even better card blogger...make sure to check out his blog and follow if your able to.


Thanks, also, to all who are reading this post, and have read this blog in the past...I am blessed to have you all in my life.

Posted by John Sharp at 1:57 AM No comments:

That's what Billy  over at Cardboard History.  asked bloggers, and I thought I'd give this a shot.


Baseball cards have been part of my life since longer than I can really remember, and there's always been cards and things related to cards that I'd really like to do one day, things that I wish I'd done when I was much younger and had the money to do them.

Baseball and collecting baseball cards were all that cared about when I was a young boy, and some 50 years later its still true.


Here's just a few things I'd like to accomplish.

I don't need a graded Kaline RC, and I don't need a card that's perfect, or excellent, heck, I'll take a RC of Mr. Tiger in good condition and that I can afford. 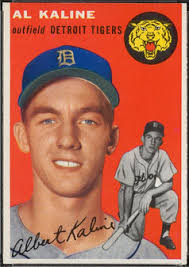 I've always wanted to go to the Topps headquarters and tour the place where baseball card magic has come alive since the early 1950s.

I know it's got to be a magical place. 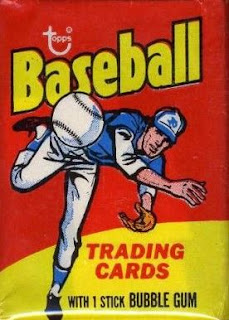 OK, I know this is probably impossible, but the one card I have, a Freehan card #11/25, is one of my favorite Freehan cards.

I don't have the financial resources to chase /11 Freehan cards, but, hey, maybe there's a few trades to be made. 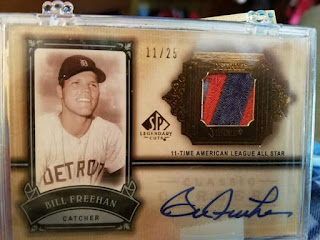 🐯 Own one Ty Cobb tobacco card.

Oh, to own a tobacco card of the greatest Tigers ballplayer of them all, Tyrus Raymond Cobb.

The Georgia Peach isn't cheap, but, again, I wouldn't expect to get a graded card...maybe there's a few out there of lesser condition that'll find it's way to me. 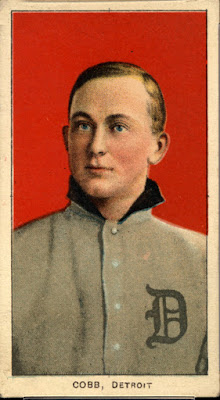 ⚾️ Attend the 2019 National Sports Collector Convention to be held in Chicago. 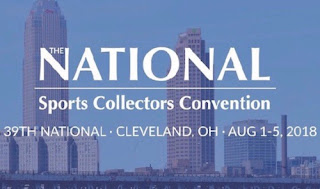 I have been to one National, in Atlanta, a long time ago, early 1990s, but since my blog, and being on social media, there's so many great people that I'd love to meet, including Billy, who started this conversation, and, was also my Secret Santa last Christmas.

Next year the show is back in Chicago, and that's when I'm hoping to go and meet all the great card collectors out there. 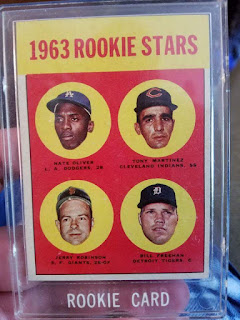 This just seems to be difficult for me, in that, I just can't send it in the mail, as it's never been out of my possession since that spring day in 1981 that I bought it for a mere $10 at a Jacksonville card shop.

Maybe, one day, if I'm at a card show and there's a graded person there, and I can afford it, I'll be able to get it done.


Well, there's a few of the things that, one day, I'd like to accomplish for my collection.

I'm sure there's more, but it's taken me a week to type this out  so I'm stopping for now.


Thanks for reading, and  as always, PLAY BALL! ⚾️

Today's mailbox brings the reward of being in a pick 'em contest from Johnny's Trading Post..


First I have to say that I wasn't a good participating member of this contest, having forgotten that I'd actually agreed to being in it.

My health kept me out of touch, and I didn't even know the game had started.

Johnny sent out an S.O.S. for me, and defgav hit me up with a Twitter message to find out if I was still around, and I thank him for that.


Upon getting myself back into the game I was able to chose #11.


My pick, which luckily went without being stolen by another player in the game, resulted in this amazing card! 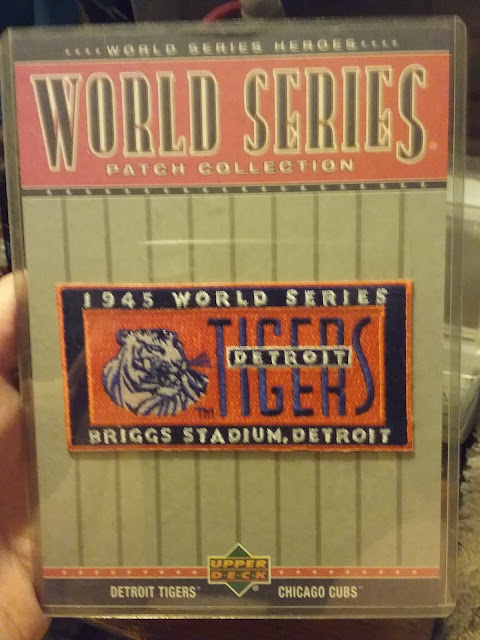 I don't know how many times over the past few year that I've come across blogs that have featured baseball cards that I never knew existed, and this card qualifies in that category.


I also didn't realizehow big the card was...it's like getting an oversized postcard.


In 1945, World War II was winding down with the defeat of Nazi Germany in May of 1945, and as the summer of baseball continued into the summer, the Tigers got back there premier power hitter, Hank Greenberg, on July 1st.


The team rode the back of Hammerin' Hank to the A.L. Pennant, and a triumph over the Cubs in the Series.


Thanks again to Johnny for the contest, and the great card, it's very much appreciated, that's for sure.

The vintage, old school baseball card master, Cards From The Attic, is at it again, and card collectors and baseball fans will be having a fantastic weekend leading up to the 2018 Big League All-Star Game with another  contest full of awesome giveaways.


If you're on Twitter go follow Cards from the Attic, and enjoy all the magic of  old school Topps All-Star Baseball Cards.

All you have to do to get involved is to VOTE on which All-Star cards you prefer, in a bracket style contest. 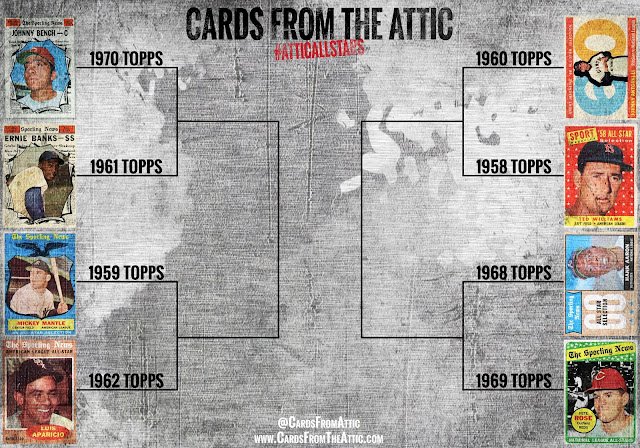 Collectors pick their favorite cards, and interact with each other throughout the contests, and, hey, you might just come out with some old school cards to add to your collections!

When you post about the cards, use the hashtag #AtticAllStars to share your comments with the group, and make sure to re-tweet the contests to your followers...the more the group grows, the better!


Oh, and by the way... how about a chance to WIN  Mickey Mantle and Willie Mays cards during the contest!

Happy Baseball Birthday....Yadier Molina is a Hall of Fame Catcher 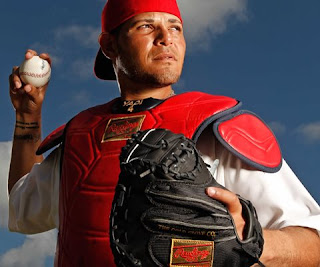 Off and on this week on Twitter I've seen this debate about weather or not he's a HOF baseball player.


The fact that this is even a debate is ridiculous... Yadi Molina is a HOF catcher...period.


This debate, as do most these days about baseball, include dumb analytics scribes trying to use their mathematical nonsense to make Molina look like he's just another guy who squatted behind home plate for 15 years, and not the BEST CATCHER in his generation. 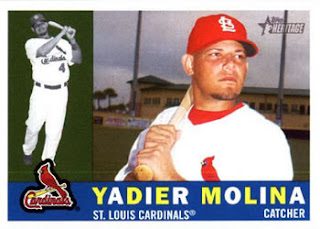 I watch baseball, I don't cruch numbers, or come up with crazy, nonsensical data, I just watch games, as I've done since I can remember, and Yadi Molina is as good as any catcher in the 52 years that I've been a fan.


That doesn't mean that he's Johnny Bench, or Bob Boone, or Pudge Fisk, or Pudge Rodriguez, or even Mike Matheny, his current manager...it means that he's Yadi, a man who's career speaks for itself...


The thing I read the most abouf when anti Molina HOF posts are written, it's about his offense.. 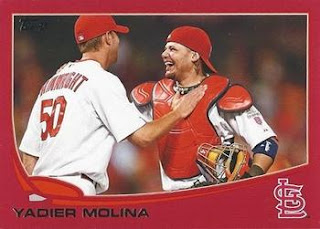 Baseball is, in its core, not just numbers in one area of play, or another, that you judge a player, it's about the complete game that player possessed in his career.


When I watched the Cardinals play baseball the past 15 years, I automatically
thought about Yadier Molina and how he would affect the game defensively, because, after all, that's the #1 job of a catcher, to call each pitch, to guide his pitcher through each hitter, to control the running game of the opponent.


Yadier Molina will be in the Baseball Hall of Fame, and he deserves it.

This My Mailbox post is to thank Cards From The Attic for making this old Tigers fan very happy by sending me this 1960 Topps Detroit Tigers Team Card. 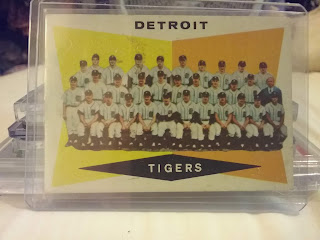 Up until it arrived last week, I had never held a '60 Tigers Team Card in my hands...it was a joyous day that I wasn't sure would ever happen.


Being born in 1960 I always wanted, one day, to complete an entire set of Tigers cards from that Topps set, and this is a great addition.


One of the best things going on over on Twitter is Cards From The Attic and his awesome giveaways  and contests.

If you're a tweeter, follow the account, and enjoy the 4th of July by talking vintage baseball cards along with your barbeques, ball games, and fireworks...It will be worth your time!