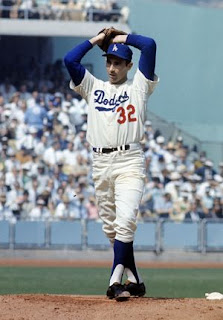 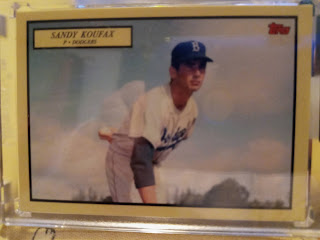 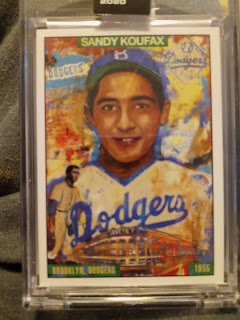 I wouldn't mind getting a few more of the Project 2020 cards of Sandy.
🚞 If you're on Twitter, are a Dodgers fan, or, like me, a baseball fan in general, I suggest following  Dodgers Cards, a terrific page that celebrates the history of the Dodgers, all the way back to the Bridegroons, Trolly Dodgers, Robins, and Superbas.

Sandy Koufax finished up his career before I really paid attention to the big leagues, retiring after the 1966 season due to increasing pain in his left arm.
🦾 Known as the "Left Arm of God," Sandy would go on to the TV booth for the "Game of the Week," and that's were I first learned about him.
As I grew up reading books and watching more baseball on TV, I learned about his playing baseball and basketball at the University of Cincinnati, in 1954. 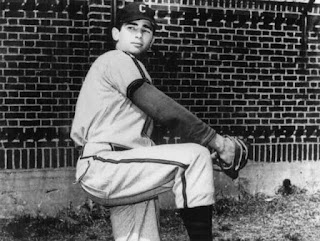 Sandy was inducted into the National Baseball Hall of Fame in 1972, on 344/366 ballots by the BBWAA.
Sandy won just 9 of his big league wins in 3 seasons playing for his hometown Brooklyn Dodgers, before Walter O'Malley moved the ball club to Los Angeles, were he won just 27 games from 1958-60.
1️⃣9️⃣6️⃣1️⃣ - Sandy saw the beginning of his future greatness in 1961, as he made his first All-Star team, winning 18 games, and striking out a N.L. leading 269 batters.
Thanks again, for stopping by and taking time out of your day to give my blog a read.
Have you purchased any Topps 2020 cards?
Who's your favorite Brooklyn Dodgers?
Los Angeles Dodgers?
For me, it's Steve Garvey, the great Dodgers 1st Baseman from the 1970s, and the wonderful Jackie Robinson, who's probably also many of your choices as favorite Brooklyn ballplayer.
Here's hoping you all had a very Merry Christmas, and that we all have a wonderful, wonderful, Happy New Year!
Happy Baseball Birthday! Sandy Koufax, here's hoping that you're having a terrific day with family.
Play Ball! ⚾⛄
Posted by John Sharp at 2:07 PM