I must admit I haven't been much into the World Baseball Classic.

As I'm preparing this blog post, a fight, baseball style, has broken out in the Mexico-Canada game.

Alanna Rizzo ‏@alannarizzo
6 up, 6 down for Zambrano. And apparently there was just a brawl in Canada/Mexico game. 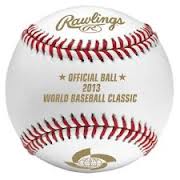 The world wide tournament, first played during the spring of 2006, is a showcase of just how talented baseball players are all over the world.

I am trying to become much more interested in this years WBC, and have actually been watching games all week on the MLB Network.

Team USA has already lost, a 5-2 set back last night vs. Mexico.

I'm sorry, but a big league baseball team should never lose to a team from Mexico.

Then again, team USA isn't exactly throwing the best of the best out onto the field during the WBC.

On the pitching side, the USA has N.L. Cy Young winner R.A. Dickey, who started and lost Game 1 last night, and Gio Gonzales, and...Jeremy Affedlt?

It's not easy trying to win when the best American players, for whatever reason, aren't playing.

Team USA will probably always fail to field a great team, because many teams just won't want their star pitchers leaving spring training camp to throw pitches for some other team.

Hey, as a Tigers fan, I really don't want Verlander anywhere near the WBC.

I don't want Verlander taxing his arm in what is really a meaningless tournament to American baseball fans.

I think the WBC is a good idea, but why play the tourney in March, as teams are preparing for the start of a brand new season?

I'd rather see the Tigers continue to play spring games, continuing the process of building a pennant winning...a World Series championship baseball team.

I hope Team USA rebounds, plays better tonight and Sunday, and advances to round 2.

Are you watching the WBC?

Please vote in the poll on the top right side of the blog home page.

Enjoy the baseball...Play Ball!
Posted by John Sharp at 6:41 PM