Today is St. Patrick's Day, but instead of green, we go Brooklyn Dodger Blue and celebrate the birthday of former National League batting champion Pete Reiser.

It seems to me that Pete Resier is the forgotten man in the era of the great Brooklyn Dodgers teams of the 1940s and 1950s.

1941 made Reiser a household name in Faltbush.

That .343 BA made him the first rookie to ever lead the N.L. in hitting. 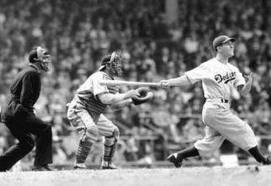 Pete Reiser only knew one way to play baseball, and that was full steam ahead, and his aggressive, all out play caused many an injury, including having to be taken off on a stretcher quite a few times.

Many knowledgeable baseball people, including Reiser's Dodger Manager, Leo Durocher, think his many injuries kept Pete from being one of the great players of the era.


Leo Durocher once said of Reiser..."Pete had more power than Willie(Mays) — left-handed and right-handed both. He had everything but luck."


Pete played for the Dodgers through the 1948  season, then played for the Boston Braves in '49-'50, the Pittsburgh Pirates in '51 and the Cleveland Indians in '52.