Today's baseball birthday is in celebration of the great Harry Caray. 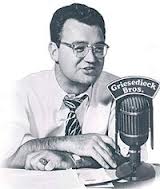 I first saw Harry broadcast games in the early 1970s, when he was the colorful play by play announcer for the Chicago White Sox.

I loved his enthusiasm, his love of baseball.

I liked that he would get after a player for dropping a simple pop up, or a grounding into a double play with the bases loaded.

Harry was a one of a kind announcer, who made no excuses about being a team homer when it came to broadcasting baseball games.

Caray started broadcasting baseball games for the St. Louis Cardinals in 1945, and along with Jack Buck, announced Cardinals games over famous KMOX radio.

Harry was beloved by Cubs fans, who couldn't wait to hear that famous 7th inning stretch version of "Take Me Out to the Ball Game."


When I worked at a sports bar in the early 1990s I would always turn up the sound during the Cubs home stretch, so the patrons could hear Harry do his thing.