There are somethings that are just ugly, and this card, I hope, is ugly enough for Peter's UGLY Baseball Card Contest this year. 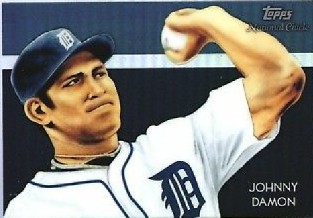 The first time I pulled this card out of it's pack it's scared me, and nothing's changed.

I'm not sure what's going on with Damon's expression, but it looks like, while his mouth is ready to explode, his eyes seem rather calm.

Also, the Olde English D isn't correct, as they're using the same wider D as on the jersey instead of the traditional skinny D that's been on the cap (which looks like a batting helmet on Damon's head) for decades.

To make matters even uglier, I've had many collectors send me the card in packages over the years...and in multiples...clearly they also agree that it was, well, too ugly to keep.

Anyway, thats my ugly baseball card post, and I hope you found it amusing, or, at least, well, ugly.