April Sours...Please Bring on May Flowers

One month of the big league season has been played, and as tough a start as my Tigers have had, the month of May brings sunshine and the hope of better things ahead.
Detroit has just 8 wins... the big league leader in doubles has 10 two baggers.

💓⚾💓 Doubles have always been one of my favorite things about baseball, going back to learning about the great Tris Speaker, the All-Time leader in doubles.... 792!
💥💥 The active leader in doubles, Albert Pujols (669), is still, at age 41, 113 behind Speaker.
🐯🐯 Miguel Cabrera, second behind Pujols, with 582 doubles, is, at age 38, still  210 behind the mighty "Grey Eagle."
👉 My Tigers have Ty Cobb (665) , Charlie Gehringer (574),  and Al Kaline (574),  at the top of the franchise lead in doubles.
➡️ My favorite Tigers ballplayer, Bill Freehan, collected 241 two base hits, including 26 in 1971.
⭕⭕ Over the past several years we've all been paying more attention to doubles through our friend Collecting Cutch, and his annual Save Second Base contest for Breast
Cancer Awareness.
We're only 5 months away from October 1st, so, make sure to check in on those big league stats every few weeks, you never know, you might end up guessing correctly on who'll be leading the National League in reaching second base the most at the end of the 2021 baseball season. 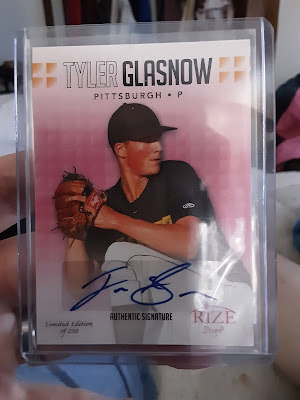 I was fortunate enough a few years ago to pick Anthony Rendon, and I received this cool Tyler Glasnow card.
👉 Get those 💗 PINK 💗 baseball cards ready to post...its NEVER to early to prepare for the BEST month in blogging!
Enjoy the rest of your weekend...PLAY BALL! ⚾️⚾️
Posted by John Sharp at 7:50 PM