And the winner is...Aye Chihuahua!

After two million fan votes on Milb.com the El Paso Chihuahua's have been chosen as the "Best Cap in the Minors."

The Chihuahuas beat out the Richmond Squirrels and the Albuquerque Isotopes for the honor.

For three weeks this month fans of Minor League Baseball teams across the country voted for their favorite teams ball caps.

The Top Five caps as voted on by the fans were El Paso, Richmond, Albuquerque, the Quad City Bandits, and the Durham Bulls.

The top Southern League ball cap belongs to the Montgomery Biscuits, at #11.

For us Detroit Tigers fans, the franchise has three affiliate caps in the top 24, with the Toldeo Mudhens at #13, the West Michigan Whitecaps at #20, and the Erie Sea Wolves at #24.

As readers of this blog you now how cool I think the Chihuahuas are, and yes, I voted for the black home cap with the angry Chihuahua.

Congrats to the Chihuahuas, Squirrels, Isotopes, and to all the fans who voted. 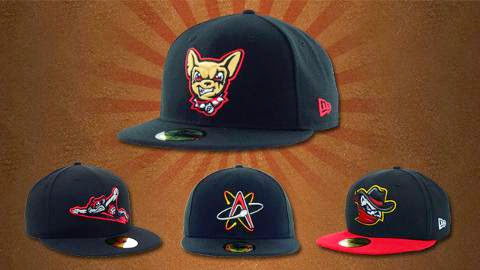