This terrific old baseball program from the 1948 Seattle Rainiers was posted on my Facebook page by the great baseball fans at When We Wore Fedoras.

Old baseball stuff, as you may know, is something I can't pass on looking at, or reading about.

Things like this program continues to add to my love of baseball history.

The Rainiers were a Seattle baseball mainstay for over 70 years, starting as the Indians in 1903.

The Seattle Indians were named as such to honor the Native Americans of the Pacific Northwest.

The Seattle team was also.know as the Clamdiggers, when they were part of the Pacific Northwest League, from 1907-18.

The Indians were part of the newly formed Pacific Coast League in 1903,  along with the Oakland Oaks, Los Angeles Angels, Portland Beavers, Sacramento Salons, and the San Francisco Seals.

The Indians/Rainiers/Angels were minor league affiliates of the old Boston Braves, the Cincinnati Reds, Detroit Tigers, and the California Angels, who changed the Rainiers to the Seattle Angels. 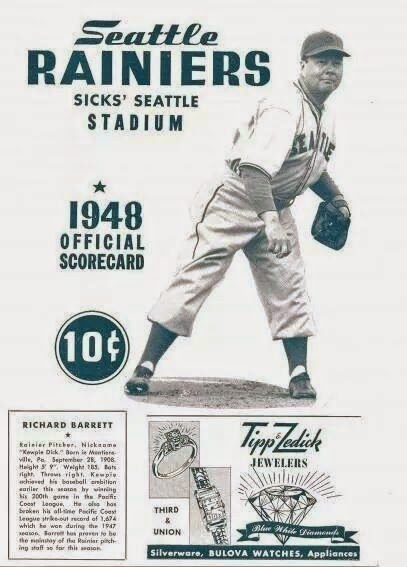