Major League Baseball has made changes to the rosters of both the American and National League teams for the upcoming All-Star Game, changes that will benefit both the game, and the fans.

Baseball's Summer Classic will see both league rosters raised to 34 players, including 13 pitchers on each staff, and from now on, each team will have the use of the DH, regardless where the game is played. Beginning in 1989 the A.L. has had the use of a DH when an A.L. team played host to the game every other year, but now both squads will use the extra batter regardless of the park. Fans will cast ballots for the A.L. DH, but the N.L. Manager will chose a DH for the game . The A.L. has used the DH in regular season games since 1973, and the DH has been used in the World Series since 1976.

The expansion of the rosters will allow deserving players that were not voted in by the fans to be selected to the All-Star Game. Don't forget to cast your ballots for the 81st MLB All-Star Game, which will be played on July 13th in Anaheim, California. Ballots can be found at all big league ball parks, or by voting on line at your favorite teams web site, or at www.mlb.com. 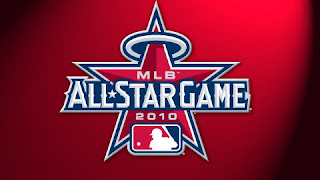