Yadier Molina of the St. Louis Cardinals became the first catcher in big league history to catch 2,000 games for one team. 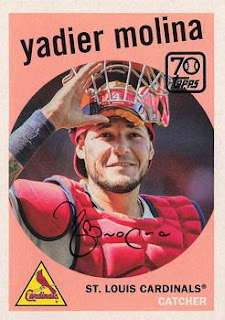 Molina is just the 6th backstop to catch 2,000 games in MLB history, joining Ivan Rodriguez, Carlton Fisk, Bob Boone, Gary Carter, and Jason Kendall.
Most Games Caught, MLB History.
The top 5 is certainly interesting, in that you have the two guys nicknamed "Pudge" at the top, and a guy in Kendall, who was a terrific catcher that most fans, including myself, wouldn't figure would be at #5.
Yadier, one of my favorite All-Time catchers, will most certainly finish the 2021 season in the #3 spot on the list, but that may be as far as he gets, in that many believe this will be the last season for the former 4th rounder from Puerto Rico.
1️⃣5️⃣8️⃣1️⃣ My favorite catcher, a guy named Bill Freehan, is still 26th All-Time on this list!
Enjoy the rest of your Wednesday night, and thank, as always, for stopping by to read my blog, it's much appreciated.
Congratulations, again, to Yadi Molina, on his milestone on the way to the HOF in Cooperstown, New York.
Play Ball! ⚾
Posted by John Sharp at 7:51 PM