Well, we're down to the last two games of the baseball season...maybe.

The Houston Astros went to Washington, D.C. over the weekend and battered the Nationals to take a 3-2 lead in the Best of 7 Series.


6️⃣ If the Astros win Tuesday night we have two entries w/ the Astros in 6.

👉 BRETT has Gerrit Cole as MVP.

👉 ALEC has Jose Altuve as MVP.


7️⃣ If we go to a Game 7 on Wednesday night we have THREE entries w/ the Nationals in 7.

👉 THE LOST COLLECTOR has SCHERZER as MVP.

👉  DEREREK has RENDON as MVP.


🚨 There are two other entries. 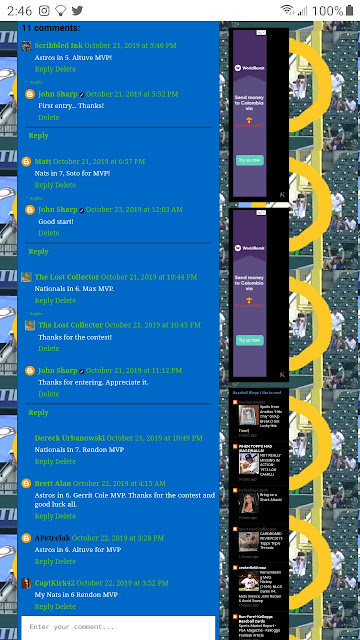 🎟 With all 5 Series games being won by the road teams, it's anyone's guess if the Astros will close it out tomorrow night, or if the Nationals win and we get to see a Game 7 matchup between Max Scherzer and Zach Greinke.