It was an amazing year for all of us proud fans of the Maize & Blue, culminating in a run towards a baseball Championship that ultimately fell just a game short.


I had to make this post after seeing the new issue of The Wolverine. 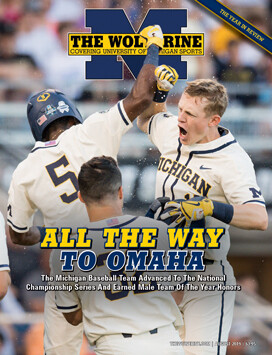 The Michigan baseball team played in the College World Series for the first time since 1983, when a future Cincinnati Reds HOF shortstop named Barry Larkin played for the Wolverines.


The Wolverines won Game 1 behind pitching hero Tommy Henry, a fellow graduate of Portage Northern High School, but were ultimately defeated by the powerful Vanderbilt bats.


This issue is a must have, and if your a Michigan fan you can order it here, or I'm sure it's in fine bookstores across the GREAT STATE OF MICHIGAN!

Now it's on to MICHIGAN FOOTBALL!