My fellow baseball fan and blogger Matthew over at Bob Walk the Plank wrote a terrific piece on former  Pirates catcher, Jason Kendall.


It's a well thought out post on how Kendall has some of the best action shots on his baseball cards, and, well, because Blogger doesn't let me post a photo in the comments section,  I wanted to post about how I liked watching Kendall play baseball...being a guy who loves big league backstops...and post my favorite Jason Kendall card in my collection. 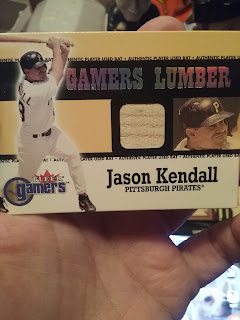 I know, its a relic card, not a action card, but it's a card called Gamers Lumber, and I pulled it out if a pack of 2000 Fleer Gamers, and, well, Kendall was a good hitting catcher, and I thought it was awesome that he was in the set...even though Jason only hit 75 HRs in his career.


Another reason why I always liked Jason is that he's a 2nd generation big league catcher...and I remember watching his Dad, Fred Kendall, also a catcher, who played in the 1970s, mostly with the San Diego Padres...he only smacked 31 dingers in the big leagues. 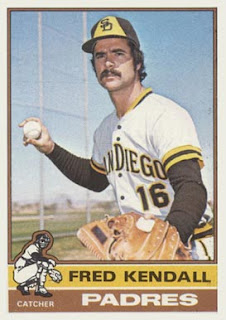 If you're a Pirates fan, or a card collector, head over to BWTP and check out Matthew's blog.