Major League Baseball announced the 30 finalists for the 46th annual Roberto Clemente Award, given to the big league ballplayer who achieves greatness off the field in their local communities. 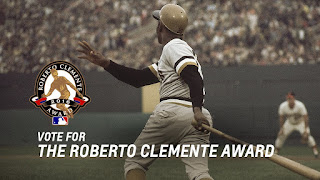 Established as The Commissioner's Trophy in 1971, the award was first presented to the great Willie Mays of the San Francisco Giants.

After the death of Pittsburgh Pirates right fielder Roberto Clemente  on December 31, 1972, MLB changed the name in honor of the great humanitarian who died in a plane crash trying to get supplies to the country of Nicaragua after a horrific earthquake earlier that year.

For 20 years Kaline and Clemente were the Gold  standard for right fielders in baseball, winning a combined 22 Gold Glove Awards between 1957-72, including 12 straight by Clemente his final 12 years.

Two members of the Pirates have won the Clemente Award...Hall of Fame outfielder/first baseman Willie Stargell, in 1974, and current Pittsburgh centerfielder Andrew McCutcheon in 2015. 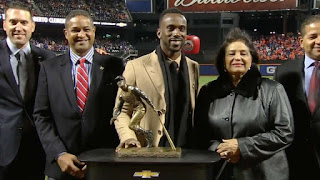 Baseball fans can vote on social media for their choice for this year's winner starting on Wednesday,  September 7th... Roberto Clemente Day across the big leagues... I'll be posting #VoteMiggy of course, as a true Tigers fan, of course. 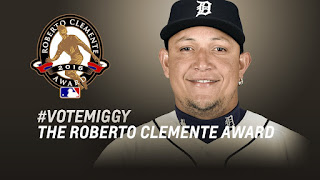 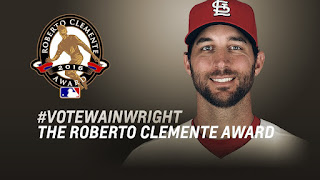 Congratulations! to all the nominees for their marvelous work.

To learn about all 30 nominees, and how to vote for your player, just go here for all the details.