One of the best baseball arguments is which big league team plays in the best ballpark.

Over at ESPN fans have the chance to vote for their favorite among all 30 big league parks, bracket style. 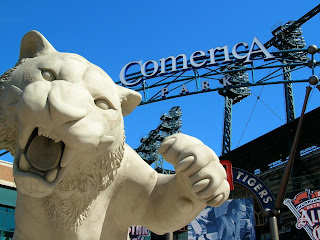 Of the current parks, I've been to Comerica Park in Detroit, Camden Yards in Baltimore, Wrigley Field in Chicago, Fenway Park in Boston, Turner Field in Atlanta, and Tropicana Field in Tampa.

Of the ballparks that no longer grace us with their beauty and grace, I've been to Tiger Stadium in Detroit, Memorial Stadium in Baltimore, Yankee Stadium in the Bronx, Shea Stadium in Queens, NY,  Riverfront Stadium in Cincinnati, Joe Robbie Stadium on Miami, and old Exhibition Stadium in Toronto.

One of the things on my baseball bucket list is to visit every big league ballpark at least once. so that leaves me with quite a list to finish.

Head over to ESPN.com and VOTE for your favorite ballparks.

Oh, and let's have an agreement that you'll VOTE for Comerica Park, Home of my Detroit Tigers.