Detroit Tigers GM Dave Dombrowski announced at the clubs annual TIGERFEST today that the team will honor the late Sparky Anderson, who spent 17 years as the Tigers manager. 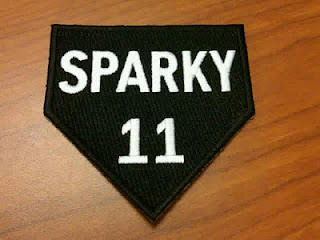 The Tigers will wear a commemorative patch starting in spring training.
The Tigers will also fly a flag in Sparky's honor @ Comerica Park, and will retire #11, which Sparky wore from 1979-1996.
Anderson took over the struggling Tigers in the middle of the 1979 season, replacing Les Moss, and immediately claimed the Tigers would be World Series Champions within 5 years.
True to his word, the Tigers were champions, starting 1984 on an amazing 35-5 run through the American League in route to the clubs 4th World Series Championship.
Anderson was the 1st manager in MLB History to win the World Series in both leagues, leading the Cincinnati Reds to back to back wins in 1975-76 before coming to Detroit, and was inducted into the National Baseball Hall of Fame.
Sparky Anderson died on November 4th, 2010, at the age of 76.
Posted by John Sharp at 12:38 PM