In the early 1990's the Detroit Tigers had a big slugging first baseman named Cecil Fielder.

I was going to a spring game in Lakeland, Florida,  where the Tigers have been playing since the Great Depression, to watch a Grapefruit League game.

I couldn't wait to get a first hand look at the big man who had hit 95 HRs in his first two years when then Tigers Manager Sparky Anderson came over to start signing autographs for fans.


That's when Sparky looked at me and said the quote at the top of the page..."he don't play on Wednesday's."

Sparky Anderson died today, at the age of 76.

Sparky was the best Manager the Tigers ever had. The best. 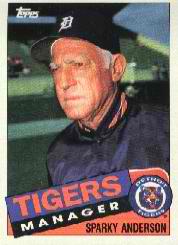 Now, I know Hughie Jennings won plenty of games, took the Tigers to three straight American League Pennants, and Mickey Cochrahne, the Tigers Manager-Catcher skippered the Tigers to their first World Series Championship, but, to me, their was  none better than Sparky.

When George "Sparky" Anderson took over as the Tigers Manager in the 1979 season, he proclaimed that "we'll win a World Series within 5 years."

Now, at the time, the Detroit Tigers were not in the best of shape, losing more games than they won over the previous 5 years, including a horrible 100 loss season in 1975.
The Tigers had no Ty Cobb, no Harry Heilmann, no Charlie Gehringer, no Hank Greenberg, no Al Kaline, on the team in the late 1970's.
There was no Mickey Lolich, or Schoolboy Rowe, or George Mullins, or Joe Coleman, or Jim Bunning on the mound.
What Sparky inherited was a still un proven batch of rookies, second, and third year players who had shown signs of being good, but not championship good.
Sparky knew what we, the fans didn't.
He made mistakes for sure, like calling a young outfielder named Kirk Gibson the "next Mickey Mantle," or talking about 3rd Baseman Chris Pitaro as the next Gold Glove man at the hot corner.
Five years after taking over as the skipper of the Tigers, Sparky Anderson guided the club to the 1984 World Series championship, right on schedule, just like Sparky said.
Sparky Anderson was a great baseball man, and an even better man.
And even though he was given #11, the number worn by by hero Bill Freehan, I loved Sparky, and the way he loved the game of baseball.
Baseball will never see a character like Sparky Anderson again.
Baseball will miss Sparky, but not as much as Sparky missed baseball.