The Greatest Little Leaguer Ever

Every year the town of Williamsport, Pennsylvania hosts the Little League World Series, the culmination of 11 and 12 year old ball players all over the world.


I played Little League baseball in Portage, Michigan in the early 1970's. I never even knew there was a World Series for us kids. We just loved playing baseball as much as possible.
My brother Robert and I played on a team together, and we were the best right side of the diamond in the Portage Little League. Me at 1st base, and Robert at second. If you hit a ball to the right side on the infield, you made a right turn, and went back to your dugout.
I did play one game of All-Star baseball in Little League, but I was out matched by the older, more talented kids.
That was as good as I got. Time to move on.
The reason for this look back to my Little League days is this article I saw in the Detroit News about the 1959 Little League World Series Champions from Hamtramck, Michigan.

The link above to the article tells the story of Pinky Deras. considered the "Greatest Little Leaguer there ever was." 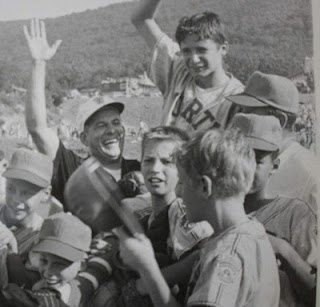 Today Deras, 64, is a retired police officer, and father of a Little League ball player. He is a humble man, who reluctantly talks about those days over 50 years ago, because he, like the boys of that era, know that it takes a team to win.

Please take the time to read this story. Yes, I admit, I read the article because the team is the only Little League winner to ever come from the state of Michigan, my home state.

I hope you will forgive my bias this once, and take a few moments to read about a time when kids played baseball for the love of the game.