The other day on Twitter someone wanted to see us post cards of our favorite kickers as the new NFL season was upon us. 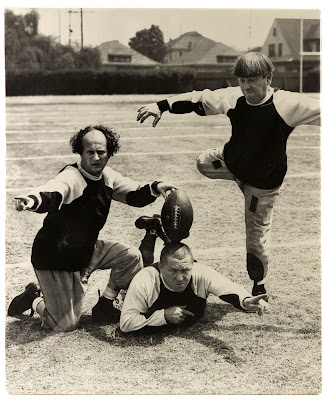 🏈 Being that is was way go late at night, I couldn't share anything at that time, but, as I was going through some boxes today I came across the perfect card to post. 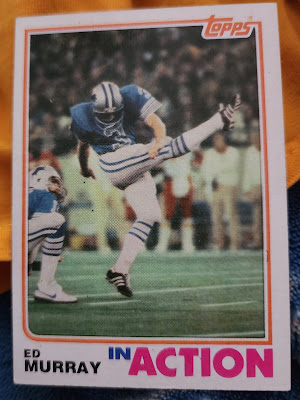 1982 Topps #344
IA
Eddie Murray
🦶 Kicking off Football Card Friday! on ye Olde Blog this year, is this 1981 In Action card of Eddie Murray, , my favorite Detroit Lions kicker of All-Time. 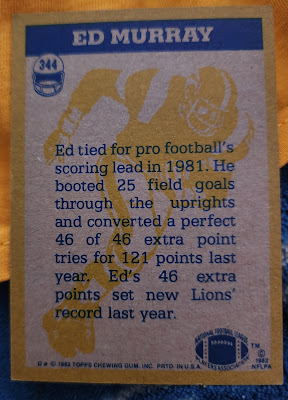 🦁🏈 Eddie Murray was the BEST kicker in the NFL as a rookie!
🏈 Murray, drafted by the Lions in the 7th round (#166 overall) out of Tulane University, was the Detroit kicker for
12 years, making 75.1% of his field goals for the Honolulu Blue & Silver. 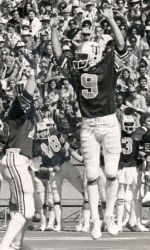 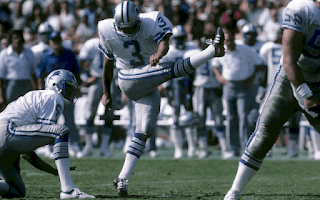 🏈 In 1992, the Lions drafted kicker
Jason Hanson, out of Washington State, and Eddie moved on to kick for Tampa & Kansas City, then kicked for the 1993 Super Bowl Champion Dallas Cowboys. 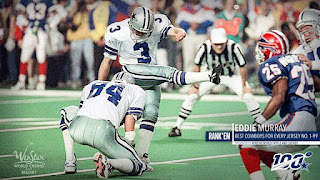 🏈 Hanson would kick in Motown for 21 years...that's 33 years with only two place kickers...we Detroit fans were certainly blessed with that position.
🏈🤔 Do you have a favorite kicker from your team?
2️⃣0️⃣2️⃣2️⃣ This is my 53rd years following the Detroit Lions, and having such terrific kickers has certainly been one of the few things that us fans have been able to cheer for.
😊 Thanks, as always, for stopping by my blog, I appreciate it.
Have an awesome weekend of watching football, and, of course, baseball...it's a great time of the year, for sure.
Let's kick off the season with a resounding  Play BALL! 🏈🏈🏈
Posted by John Sharp at 4:38 PM