You all know I love my Detroit Tigers, and it's that time again for me to help a Tigers player get to next week's All-Star Game in San Diego. 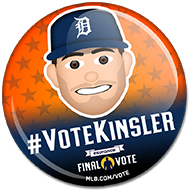 ⚾ Ian Kinsler is in this year's Final Vote  and as I've done for every Tigers player in the vote, I'm going all out as possible between now and Friday at 4pm, when the Final Vote totals will be revealed.

Of course Ian is getting help from teammate and 11-Time All-Star Miguel Cabrera.


Cabrera, who was selected to the team, finish 2nd in the fans voting to the Royals Eric Hosmer. 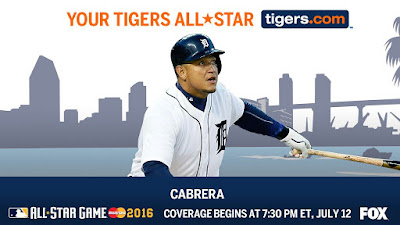 Kinsler is having a terrific year for the Tigers,  and he deserves to be a big league All-Star this season.

Today in Cleveland the Tigers finally beat the Indians, 12-2, and Ian collected 3 base hits, giving him 100 hits on the year.

The Tigers are teaming up with the Pittsburgh Pirates and their #VoteMarte campain for outfielder Starling Marte. 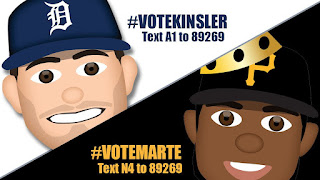 ☆☆☆☆ When you go to vote, you just select BOTH Kinsler in the American League and Marte in the National League, and then vote. ☆☆☆☆


Starling Marte  is a terrific baseball player, and is most deserving of a All-Star selection in the Senior Circuit.

☆☆☆☆ The Tigers haven't gone to the All-Star Game with just one player since 2009, when shortstop Carlos Guillen was the only Motown player to participate in the game. ☆☆☆☆

The Tigers are one of the founding members of the American League, have 116 years of history, and the fan base, to get behind the #VoteKinsler #FinalVote to get Ian Kinsler to what would be his 5th All-Star selection.

I believe in supporting Mt team, and it's players, to the best of my ability every year, and I'll give it as much as I can before the weekend is done.


I hope you do as much for #VoteKinsler as you can...I really appreciate it, and I know that the Tigers and Ian Kinsler will as well. 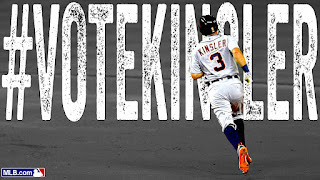