Today is a three in one post.
My apologies for the delay, my arthritis didn't cooperate very well today.
1️⃣-- Today is Day #6 of my 11 Day Countdown to celebrate my Baseball Hero, Bill Freehan, turning 79 on November 29th. 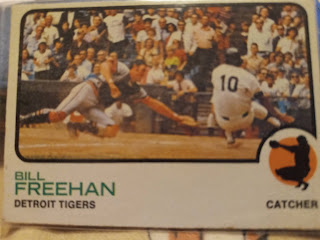 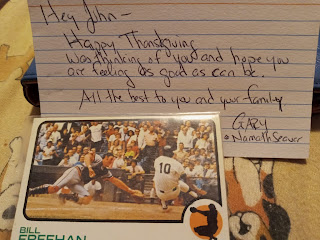 🐯 Today I was surprised to see that I received this 1973 Topps Bill Freehan card in a PWE from a fellow Twitter collector... I'm truly Thankful for all the amazing collectors I've come across on social media...they keep me going every day!
🐯⚾ After his 11 year career in the big leagues, Bill Freehan tutored young catchers in Spring Training for the Tigers, including
Lance Parrish, who would win 3 Gold Gloves, and be the "Big Wheel" of the 1984 World Series Champs. 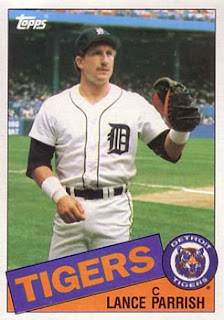 💛💙⚾ Bill returned to Michigan in 1990 to become the Head Baseball Coach, and immediately began to mentor a young catcher named Mike Matheny. 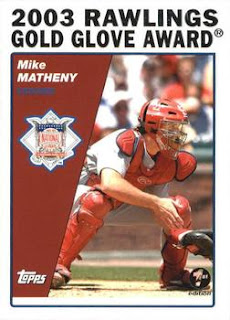 Matheny would be drafted by the Milwaukee Brewers in the 1991 player draft, and go on to win 3 Gold Gloves as a member of the St. Louis Cardinals, as well as 1 playing for the San Francisco Giants.
👉 Matheny moved on to play in SF because of a young catcher named Yadier Molina, who, six years later, would play under Matheny, hired starting in 2012, as the Manager of the Cardinals, leading them to the 2013 National League Championship.
2️⃣ + 3️⃣ = 5️⃣ --- Today's Tigers Card Tuesday & Happy Baseball Birthday! are combined to celebrate former Tigers outfielder Jim Northrup. 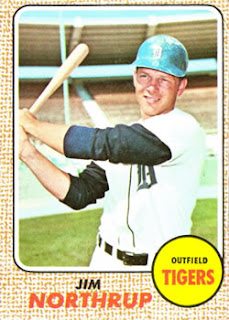 Northrup was the Grand Slam King of baseball in 1968, smashing 5 Grand Salamis, and it continued in the World Series, where Jim hit a four bagger in Game 6.

⚾⚾⚾⚾ In 1969, we Tigers fans looked forward to pulling the World Series cards, and Jim was well represented. 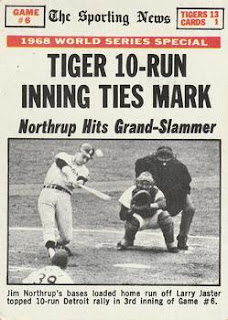 🐯 Jim Northrup was an outstanding ballplayer in Detroit, playing all three outfield positions, batting .268, with 145 HRs, 540 RBIs, 218 doubles, 42 triples, collecting 1.184 base hits.
This is one of my favorite cards of Northrup. 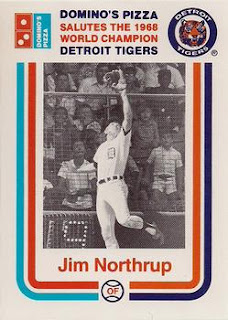 🐯🍕 This card is from a 1988 set of cards sponsored by Dominos Pizza, owned at the time by Tigers owner Tom Monaghan. 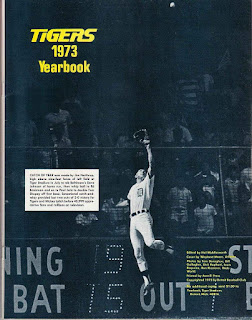 😮 I was watching this game on TV when he robbed a home run against the Baltimore Orioles.
😢 Northrup, a.k.a the "Gray Fox," passed away in 2011 at the age of 71.
Many thanks, again, for taking a moment to read by blog, it's an honor to write about the greatest game ever invented.
Have a awesome Wednesday, and I'll see you back here tomorrow.
Play BALL! ⚾
Posted by John Sharp at 9:25 PM